HS2: Conveyor network will do work of one million lorries carrying material dug up for high-speed railway 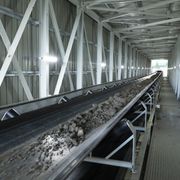 Conveyors stretching nearly two miles will move material dug up to make way for HS2, the company behind the high-speed railway has said, removing the need for one million lorry journeys.

The 1.7 mile-long network was switched on by Huw Merriman, the HS2 minister, at the project’s Old Oak Common station site in west London on Wednesday.

The controversial construction project was scaled back last year, with the government confirming the eastern leg of HS2 will no longer go all the way to Leeds and will instead stop in the East Midlands near Nottingham.

It has been beset by delays and rising costs, with some estimates putting the total price at more than £100bn.

The conveyor system will move more than five million tonnes of material excavated from three locations in the area to a logistics hub at Willesden Euro Terminal.

Freight trains will then transport the waste to three destinations: Barrington in Cambridgeshire, Cliffe in Kent and Rugby in Warwickshire.

It will be used to fill empty space for projects such as new housing developments.

Mr Merriman said: "It was a pleasure to launch this truly remarkable conveyor system at Old Oak Common and see how impressive it is in action, as it brings us one step closer to our goal of delivering a cleaner transport network.

"These conveyors are just one way in which HS2 is transforming the future of construction, by keeping the impact on the environment and local community to a minimum while driving growth across the country."

Lee Holmes, HS2 Ltd’s stations client director, said: "The launch of our conveyor system in west London is yet another important progress milestone for HS2 Ltd.

"This impressive network of conveyors means we are able to significantly reduce the impact of construction on the local area.

"Momentum on HS2 continues to build as the project nears peak construction, and systems like these conveyors are just one of the ways we are working to reduce carbon emissions in construction."