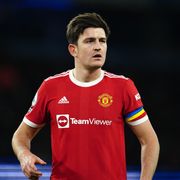 Police were called to the home of Manchester United and England footballer Harry Maguire over reports of a bomb threat, his spokesman has confirmed.

Cheshire Police said they were called to reports of a bomb threat at an address in the Wilmslow area.

There were no evacuations but as a precaution, a police explosives dog attended the address on Thursday afternoon to carry out a search of the gardens and surrounding area.

A spokesman for Harry Maguire said: "In the last 24 hours, Harry has received a serious threat to his family home.

"He has reported this to the police who are now looking into the matter. The safety of his family and those around him is obviously Harry’s number one priority.

"He will continue to prepare for this weekend’s fixture as normal and we will not be commenting in any further detail at this time."

Manchester United are set to play Arsenal at the Emirates Stadium at lunchtime on Saturday.

Maguire joined the team as an £85m signing from Leicester City in 2019, and is captain of the side.

He is engaged to Fern Hawkins and they have two young children.