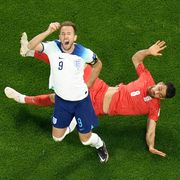 England captain Harry Kane is set to have a scan on his right ankle ahead of Friday’s World Cup match against the United States.

Kane went down after being tackled in the second half of Monday’s win against Iran and was replaced by Callum Wilson in the 75th minute.

His right ankle was lightly strapped after the game and he walked with a limp, but manager Gareth Southgate said after the match that he believed Kane was "fine".

"It looked like a bad tackle but he carried on in the game," said Southgate. "We took him off because we felt it was a moment in the game we could do that."

The need for a scan suggests the player may still be struggling with his ankle a day after the 6-2 win.

The 29-year-old is England’s second-highest scorer of all time, behind Wayne Rooney, and could surpass his tally during the World Cup.

He provided two assists during the Three Lions commanding win and it would be a big setback if he’s forced to miss games.

England currently top their group with their final pool game against Wales on Tuesday at 7pm.

Away from the England team, the tournament saw what many are calling the biggest upset in its history on Tuesday.

Saudi Arabia beat the highly fancied Argentina 2-1 after the South Americans went one up courtesy of Lionel Messi and then had three goals disallowed for offside.

But two goals in five minutes at the start of the second half turned the game on its head for a side that bookies were offering odds of 500-1 to win the World Cup before the tournament began.

France also went behind to Australia in their game but ended up winning 4-1, while Demark v Tunisia and Mexico v Poland both finished 0-0.