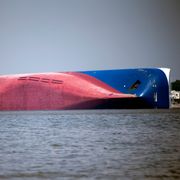 A crew member’s error in calculating the weight of cargo on a ship loaded with thousands of cars most likely caused the vessel to capsize off the east coast of the US.

The South Korean freighter, Golden Ray, keeled over in September 2019, and its wreck is still partially in situ in the waters off the state of Georgia.

It was loaded with around 4,200 cars, and the report by the US National Transportation Safety Board estimates the incident caused losses of $204m (£147.7m).

The investigation by the NTSB echoed what an expert from the US Coast Guard established at a public hearing last year – that the ship did not have enough water as ballast below decks.

This led to the 199-metre vessel being top heavy, and keeling over.

And the situation was made worse by the fact a door was left open on the lower decks – allowing seawater to flood in.

Some members of the crew were left stranded and had to be saved from the engine room – although the entire crew were eventually rescued.

The ship had only just left the Port of Brunswick, and was 70 miles off the coast when its manoeuvring system failed.

The mistake in ballast, of around 1,500 tonnes – was most likely due to an error by one of the senior members of crew.

"The chief officer made errors with the ballast tank level data entry into the shipboard stability calculation computer," the NTSB report said, "which led to his incorrect determination of the vessel’s stability".

The chief officer reports to the captain of the ship, and the document added that he was not properly trained to use the software involved in calculating the ship’s stability.

Since the incident, the vessel’s operator, the G-Marine Service Company, has increased the training for its officers on calculating stability.

Demolition of the ship began in November last year, with huge 122-metre-tall cranes being used to assist workers.

There have been various setbacks since then, including fires and oil spills.

The area has been netted off from the surrounding ocean, as cars and other debris fall into the ocean during the clearance.