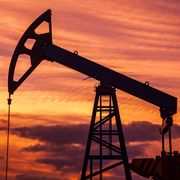 Germany has said it will stop Russian oil imports by the end of the year.

"We will halve oil by the summer and will be at 0 by the end of the year, and then gas will follow," she said, following a meeting with her Baltic counterparts.

Germany currently buys a quarter of its oil and 40% of its gas from Russia.

The country has previously resisted calls for the EU to impose a swift embargo on Russian oil and gas, warning of a recession if supplies suddenly stopped.

Ms Baerbock said Germany would follow a "joint European roadmap" because "the complete exit of the European Union is our common strength".

The US has already banned Russian oil imports, while the UK said it will phase them out by the end of 2022.

Ukrainian President Volodymyr Zelenskyy has long called for an embargo on all Russian energy imports, which are funding Russia’s invasion of Ukraine.

Despite widespread economic sanctions targeting Russian banks and individuals, the EU is still sending about €780m per day to Russia for oil and gas.

The EU decided to ban Russian coal imports on 7 April, which will take effect in August.

Germany’s employers and unions have said they oppose an immediate ban on natural gas imports from Russia, saying the measure would lead to factory shutdowns and the loss of jobs.