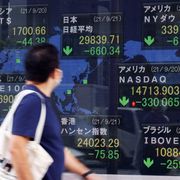 More than £65bn was wiped off the UK stock market on Friday, reflecting fears that a new coronavirus variant could wreak further havoc on international business and travel.

The FTSE 100 fell more than 3%, or 240 points, as the market opened on Friday morning, putting it on course for its steepest one-day drop in a year.

Shares in major airlines plummeted with IAG, the owner of British Airways, falling more than 21% in early trading, while EasyJet plunged 16%. The UK government said it would add six countries, including South Africa, to the red list, with flights being temporarily banned.

Overnight, Asian markets suffered their sharpest drop in two months after the detection of the possibly vaccine-resistant coronavirus variant.

The variant, first identified in Botswana, has a "very unusual constellation" of mutations that could help it dodge vaccine immunity and natural antibodies, scientists have said. On Friday morning, Israeli health authorities said they had detected a case of the new variant.

Increasingly treated as a safehaven for investors during turbulent times, digital currencies such as bitcoin and ethereum also fell more than 5% and 3.7% respectively.

Gold, a traditional investment for nervous traders, is currently in demand, as is the Swiss franc and US Treasuries, according to analysts at BayernLB.

Elsewhere, oil prices recorded their sharpest daily drop since July on news of the variant, which UK health officials said was the most significant found to date, according to scientists. There are worries that the variant could lead to a new wave of infections and travel restrictions, stifling economic growth.