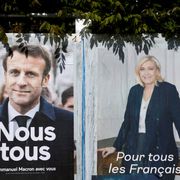 Here, they sum up the feeling on the ground ahead of a run-off vote on Sunday.

If Emmanuel Macron is nervous then he’s hiding it well.

When he arrived here, in Saint-Denis, just north of Paris, he beamed and waved to the crowd, and then spent hours talking to people.

This was less of a political rally and more like a royal visit. It even ended with an unscheduled extra walkabout, leaving his security officers to hurriedly rush into action as the crowd called his name.

There was an important resonance to all this. Saint-Denis has plenty of problems with deprivation, crime and economic uncertainty. In the first round of the election, half the voters here threw their support behind the Socialist candidate Jean-Luc Melenchon, with many deriding Mr Macron as elitist and out of touch.

That was a theme echoed by Marine Le Pen, who has spent this whole campaign positioning herself as the champion of France’s working class. She, like Mr Melenchon, has told the country that now is the time for more radical solutions; that Mr Macron is more interested in polishing his image than in tackling poverty.

So the president was here, trying to demonstrate that he does understand the squeeze on incomes and that, yes, he does appreciate the pain of deprivation. He moved, slowly, along a line of hands, answering questions and listening to problems. He said he understood there were serious economic challenges but, as some in the crowd sang the Gilets Jaunes anthem "On est la", Mr Macron insisted he had already taken steps to react to the spiralling cost of living.

He also insisted that Ms Le Pen’s economic plan was a mess, just as he had done during a TV debate, and that she had dangerously mixed up issues around security, migration, religion and crime.

And that was another reason why he came to Saint-Denis. Mr Macron is keen for the French public to believe that – for all her claims otherwise – Ms Le Pen remains an unreconstructed racist.

Here, surrounded by an ethnically diverse crowd, he offered a contrast. And remember – France has Europe’s biggest Muslim population. Mr Macron will hope that a huge percentage of those people vote for him.

But this visit wasn’t really about policy announcements. It was about smiling, shaking hands, soaking up some adulation and being seen to be listening. He knows he is well ahead in the polls. His aim now is to avoid doing anything wrong.

Marine Le Pen has strived for this moment for decades. The far-right politician has never been closer to the presidency. But is it close enough?

Her adoring and fervent supporters hope so. They turned out in huge numbers to her last rally in Arras, chanting "president Marine" and booing every mention of her rival Emmanuel Macron as she whipped them up from the stage.

This is the latest incarnation of Marine Le Pen. She has worked to soften her image, hoping to sound like she cares, specifically about the woes of the ordinary citizen facing a cost of living crisis. And in a truck stop in Roye, northern France, her message seemed to be hitting home.

"She’s concerned about the cost of living," a young mother told us. "She’s got a head on her shoulders to become president."

Isn’t she racist, though, I asked? "A lot of people thinks she’s a racist but she’s not. She thinks about us first before thinking about the others."

A father told us: "No, she’s not racist, she’s thinking about France."

In Roye, Ms Le Pen garnered nearly half the vote in the first round of this election. We met Joselito Leroy, a baker. Standing in a quintessentially French scene, surrounded by baguettes, he told us his parents were Spanish immigrants and yet he will vote for a woman who wants to see immigration cut by 75%.

But then he said he would probably vote for anyone, provided they were not Mr Macron. "From my point of view we need change. If it wasn’t Le Pen but another candidate I’d vote for the other candidate, anyone other than Macron. Things must change."

Disenchantment with the status quo is winning Ms Le Pen wider support that may bring some of the far-left round full circle to support someone on the far-right. But not in enough numbers to take her to the Elysee Palace, it seems.

As things stand, and if the polls are right, things will not be changing. The sitting president is still as much as 10 points ahead.

Marine Le Pen had a chance of changing that in the televised debate this week, but failed to land any knockout blows on Mr Macron, even if she did better than in 2017 when a lacklustre performance cemented his victory.

Does she still think she can win, I asked her. She said: "I think I’ve got every chance of winning. I think the French are going to mobilise themselves after a first Macron term in office which was devastating. The French have completely understood, last night and in preceding days, that it can only get worse. A second Macron term in office would totally destroy France socially."

These are unpredictable times that favour disrupters and have confounded the polls in other democracies.

But French pollsters have been more accurate than most. The far-right has come closer to power with each election, it seems. But they may end up having to console themselves with that fact, and dreaming of the next time, rather than preparing for power now.