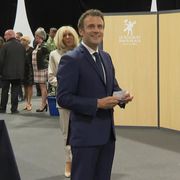 Emmanuel Macron is set to become the first French president in 20 years to win a second term after an official vote projection suggested he has seen off the challenge from Marine Le Pen.

The projected result from Ipsos saw Mr Macron get 58.2% of the votes compared with Ms Le Pen’s 41.8%.

The pair emerged as the frontrunners after the first round of voting a fortnight ago, when the country was asked to choose between a field of 12 candidates.

Since then, they have spent two weeks campaigning on a range of topics, although a great deal of focus has been placed by both candidates on how France can best deal with the rising cost of living.

There has also been a significant focus on foreign affairs, immigration and on social cohesion.

Many of those who chose Mr Macron are believed to have done so to keep out Ms Le Pen.

Controversial policies such as banning the Muslim headscarf in public and her ties to Russia were seen as major factors.

However, the far-right candidate’s support in France has grown during this campaign to her highest level ever – although it appears it might not have been enough.