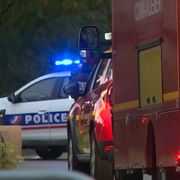 A history teacher who is said to have discussed images of the Prophet Muhammad with his pupils has been beheaded in a Paris suburb, it has been reported.

The suspected attacker was shot dead about 600 metres from the scene, the AP news agency has said.

It happened on a street in Conflans Sainte-Honorine, northwest of the French capital, at about 5pm local time.

According to Le Parisien newspaper, the attacker was an 18-year-old man of Chechen origin, who was carrying a knife. A gun was found at his side. Other reports say it was an airsoft gun that fired plastic pellets.

The teacher’s suspected attacker was shot after he refused to put down his gun, Le Parisien reported.

The country’s anti-terror prosecutor earlier called the incident a stabbing, but both the Reuters and AP news agencies said police sources told them the victim was decapitated.

The teacher had reportedly shown images of the Prophet Muhammad in class during a discussion about freedom of expression about 10 days ago.

The suspect did not have a child at the school, AP said.

A Twitter thread posted last Friday alleged pupils had been shown cartoons of the prophet.

The thread contained a video of a man who said his Muslim daughter was one of the pupils in the class – and she had been shocked by the teacher’s actions.

Reuters said it had been unable to independently verify the video’s authenticity.

Education minister Jean-Michel Blanquer tweeted that the republic had been attacked through the "despicable assassination of one of its servants".

He added that "unity and firmness are the only answers to the monstrosity of Islamist terrorism".

Interior Minister Gerard Darmanin has set up a crisis centre.