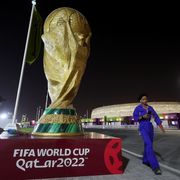 Foreign Secretary James Cleverly has said he will travel to Qatar to attend the World Cup amid controversies over human rights and the treatment of LGBT+ people in the host nation.

Homosexuality is illegal in the Middle Eastern country and anyone found participating in same-sex sexual activity can be punished by up to seven years in prison.

There are also concerns about thousands of migrant workers having died there since it won the rights to host the tournament.

Many campaigners have called for a boycott of the World Cup this year, with comedian Joe Lycett saying he will burn £10,000 of his own money if David Beckham doesn’t pull out as an ambassador to the event.

Labour leader Sir Keir Starmer and his front bench say they will not attend the tournament – which begins on Sunday – over concerns for LGBTQ rights, the rights of women and for the workers who have lost their lives.

But Mr Cleverly told the Commons Foreign Affairs Committee: "I will be going."

He said he would be attending "for a number of reasons", adding: "Because I’m a foreign secretary and it is my job to ensure British visitors stay safe."

Labour MP Chris Bryant accused him of handing gay fans travelling to Qatar a "slap in the face" by telling them to comply with the local laws.

Pressed on whether he would advise gay fans to demonstrate while in Qatar during a heated exchange, Mr Cleverly said: "No I wouldn’t."

He added: "When British nationals travel overseas they should respect the laws of their host country."

It is not the first time he has made such a remark.

Last month the cabinet minister was branded "tone deaf" for telling LGBT football fans to be respectful if they plan on visiting Qatar for the World Cup.

Mr Bryant was adamant that no fans should be travelling to the tournament.

"I don’t think the World Cup should even have been given to Qatar because workers have been killed in building the buildings, migrants have been treated appallingly and gay men are regularly entrapped by police officers and then sent to prison – particularly if you’re a Muslim in Qatar you can face the death penalty," he said.

"So I don’t think any of it should be happening but then you come out and say gay people should respect Qatar – it does feel a bit of a slap in the face."

Mr Cleverly responded: "There will be LGBTQ+ football fans going to Qatar, I want them to be safe. Genuinely my question is, for those gay fans who want to go watch the football, what advice realistically should I give other than the advice I believe will keep them safe."

He said he has told the Qatari authorities about "how important we feel that they should respect gay fans" and insisted "we’re very proud that we champion gay rights around the world".

The World Cup kicks off on Sunday. England play Iran on Monday, then later that day Wales face the US.

Foreign Office advice notes that in Qatar "any intimacy between persons in public can be considered offensive, regardless of gender, sexual orientation or intent".

On Monday, Sir Keir told broadcasters: "My position on Qatar is very clear, I’m not going to go and none of my front bench will go.

"And that’s because of the record in relation to the workers that have lost their lives, in the construction of some of the facilities, with no trade unions there to represent them, the LGBT issues that arise and the oppression of women."

But he said Welsh Labour leader Mark Drakeford is in a "different position", as he attends as Wales’s first minister.