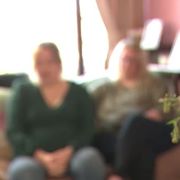 The family of a former policeman is calling for the creation of a new body to help those facing domestic abuse at the hands of serving officers.

The widow and daughter of Ricky Jones – who spent 26 years as an officer at Gwent Police – have said they suffered years of coercive control by him but felt unable to report it to police because of his links to the force.

His death has recently exposed allegations of homophobia, racism and misogyny within Gwent Police, which are now being investigated.

Speaking to Sky News, his widow Sharon and daughter Emma, whose names have been changed, said more needs to be done to help those who feel unable to report domestic abuse.

"I was trapped," said Sharon.

"Wherever and whenever I went to any organisation, they would just always refer me back to the police."

She claimed Ricky Jones would dictate what the family ate and where they slept, and controlled them down to minute detail, such as allocating them sheets of toilet roll and insisting skin particles from the children were cleaned off furniture.

Emma said: "To paint a picture, my father, he had full reign in this house, full control about what food we ate, where we slept.

"My mother was told she didn’t love us, that she was a bad person. And I think over the years mum, I think you’ve believed him".

"I did believe him," Sharon said.

She explained that she did consider reporting him to the police, but says her husband prevented it.

"On one occasion, I said that if he didn’t stop what he was doing to me and the children, I would go to the police about him.

"Then, maybe that same night or the following day, he came to me and said: ‘I’ve been in work and I’ve sorted it – go in if you want, to the police, but they know you’re coming and they won’t listen to a word that you say’."

The pair are now calling for a public inquiry and the creation of a new body that can help those facing abuse at the hands of serving officers.

Sharon said: "I believe I’m not the only one.

Emma explained this is about more than just identifying certain officers.

"Wouldn’t it be nice to say there is somewhere you can go and it will be dealt with appropriately?

"But there’s nothing in place currently like that, so I feel like a public inquiry could contribute to actual real change that will help women across the UK and will help everybody."

Ricky Jones took his own life in 2020, and it was only while looking on his phone for evidence of abuse for the inquest, that daughter Emma uncovered another horror.

WhatsApp and Facebook messages – first reported by The Sunday Times – between Jones and other serving and retired Gwent Police officers, that were homophobic, misogynistic and racist.

Emma said one message sent between Jones and other officers showed a picture of Grenfell Tower alongside a quote "The Great Muslim Bake-off".

Another message discussed two officers having sex in a patrol car, with a retired officer saying: "He has been shagging on duty and it’s been recorded on his tetra [police radio] – didn’t he learn anything from me at all?? I thought I taught him well and how not to get caught."

Emma said she wasn’t surprised by the messages on her father’s phone.

"I know who my father was. Contrary to how he was presenting himself outside this house, I know that he wasn’t a very nice person.

‘If you’re in the boys club – you’re protected’

"I think that this probably rings of these men in the police – and they all look after each other. It’s all a big joke. They all leak this information. They will chat about all this information. No one ever reports it.

An investigation into allegations surrounding Gwent Police was launched earlier this year by Wiltshire Police, which told Sky News it cannot comment on ongoing investigations.

But the Jones family say they have little faith in the inquiry, and have even spent £2,000 making a professional digital copy of the mobile phone, in case the evidence is lost by police.

In response to concerns raised by the family, Gwent Police Chief Constable Pam Kelly said: "The initial complaint raised by the Jones family did not include the conduct matters now emerging, and as new issues come to light we will continue to take swift and robust action.

Police: These behaviours have ‘no place’ in force

"We continue to be horrified by the comments and material shared by retired officers and a small number of serving officers.

"These behaviours and attitudes have no place in Gwent Police and we will continue our ongoing work with our colleagues to set out clear expectations around the standards that both we and the public expect.

"We’ve worked to ensure that anyone, a member of the public or a colleague, bringing issues forward can do so in a safe and supportive way, and remain supported throughout any investigation and subsequent disciplinary process.

"We’re pleased that feedback from victims and witnesses in recent and historic cases is demonstrating that we are getting this right.

Read more:
Sexual abusers will be ‘rooted out’ of South Yorkshire Police
Victim of grooming gang alleges police officer was among abusers

"We’ve worked with victims of crime, including survivors of domestic abuse, who have assisted with the development of our victim care unit.

"We would encourage any person who doesn’t feel confident in reporting to us that they can speak to our partner agencies, with whom we work closely, so that they can receive support and help they need.

"We’ve also set out our aim to become an anti-racist service and will continue to work on the generational change required to ensure that every member of our community can be confident in our commitment to that aim.

"While the independent investigation is underway we’re unable to comment on the individual allegations but we have demonstrated that we do take professional standards of behaviour extremely seriously and will take action against any officer or staff member breaching them regardless of rank."