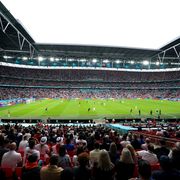 The UK and Ireland have submitted a joint bid to hold the Euros in 2028 – with a shortlist of 14 stadiums already lined up.

The bid dossier says it details "a clear and compelling vision" for the European Championships, using the slogan: "Football for all. Football for good. Football for the future".

"We are delighted that government partners of the UK, Ireland, Scotland, Wales, and officials in Northern Ireland, support this bid," said a joint statement from the five bidding associations.

"Together, we believe we can deliver a world-class tournament, and that hosting Euro 2028 will achieve a strong and sustainable legacy for football and wider society, helping to drive economic growth in local communities."

The UK and Ireland had initially undertaken a feasibility study looking at the possibility of bidding for the 2030 World Cup, but switched focus to the Euros.

Their Euro 2028 bid faces competition from Turkey, with UEFA’s executive committee set to make a decision on hosting for the competition, and the 2032 contest, in September next year.