Euro 2020: 10 moments that could make the tournament very special 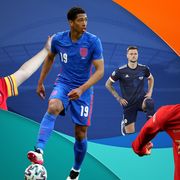 Euro 2020 has officially begun. Prepare to scream in patriotic excitement, and wince in flabbergasted despair.

It’s an odd name for the tournament, given that it’s 2021. But, as we know, the football authorities always know best. Especially when it comes to VAR, obvs.

If your TV is on the blink, or the fridge missing your favourite beverage – quite possibly of an alcoholic variety – now is the time to take action.

Here, in the meantime, are the 10 moments that could make it special, we reckon. (Thanks to Sky Sports for the loan of their crystal ball).

1. Will England’s Jude Bellingham become the youngest-ever player in a European championship? And what are his metatarsals like?

Bellingham, who plays his club football with Borussia Dortmund, starts the tournament as a 17-year-old. If England go all the way, and last until the final on Sunday 11 July (I know, I know), he will be 18.

Currently, the youngest player to have appeared at the Euros is the Netherlands’ Jetro Willems. The former Newcastle United wing-back was 18 years and 71 days when he played first at Euro 2012 (which was actually in 2012).

Bellingham’s birthday is on 29 June. Therefore, should manager Gareth Southgate play him at any stage of the tournament, he will become the youngest ever.

And he will STILL be the youngest player ever should England – presumably via some sort of divine intervention – make the last two.

But England have had great young talents before: Michael Owen, David Beckham, and Wayne Rooney, for example.

All had problems with their metatarsals (toes, basically).

Have any sports journalists asked Bellingham about his metatarsals? And if not, why not?

People have been able to return to stadiums to watch the matches, which still seems quite novel.

TV networks will be broadcasting their cultured noises of appreciation and occasional grumbles of disapproval instead of a soundtrack. It will be real and "organic".

So: will the pandemic have tempered fans’ behaviour? Will they be unremittingly nice to opposing supporters, and clap appreciatively when the other side scores a goal? Will they refrain from making dodgy hand gestures (with carefully sanitized fingers) and sing only nice songs, entirely free of expletives? NO, OF COURSE NOT.

This is next Friday, at 8pm, at Wembley. Clearly, these fixtures have always been quiet, restrained affairs in the past.

Why would it be any different this time?

Listen and follow ClimateCast on Spotify, Apple Podcasts, or Spreaker

France, Germany and Portugal are all in this group, meaning there could be some classic encounters, or some humdrum draws as they seek to nullify the threat from their opponents.

The talent on display will be prodigious, including Chelsea’s Kai Havertz, Paris Saint-German’s Kylian Mbappé, and someone you may have heard of called Cristiano Ronaldo, more on whom next.

You could be thinking that one of these accomplished footballing countries will not survive the group stage.

Unfortunately (or fortunately if you are German, French, or Portuguese), that is not necessarily the case.

The top two in each group go through to the knockout stage – plus the four best third-placed teams.

So, actually, France, Germany or Portugal might not make the knockout stage.

What a terrible shame that would be (if you are English, Welsh, or Scottish).

Probably. He is quite good, all things considered.

He will be trying to set a new record for goals in Euros finals.

In the 2016 event, he equalled French legend Michel Platini’s record of nine.

Ronaldo already has the record for the most appearances in tournament finals, at 21.

His current goal tally for Portugal is a paltry 104.

That match, on Monday 21 June at 8pm, seems a bit of a mis-match. Finland are currently ranked 54th in the world.

So a victory over the Belgians, who have such luminaries as Manchester City’s Kevin de Bruyne, seems unlikely.

Thus: ANYTHING CAN HAPPEN (but probably won’t).

7. Will any Wales super-fans travel to Azerbaijan?

They already have. The team will be playing in the Baku Olympic Stadium.

But the weather can’t be any worse than it is at home.

Will some fans boo? Please, please, let’s hope not.

England are determined "more than ever" to take a knee during Euro 2020, Gareth Southgate has said.

In terms of football post-pandemic, the tournament is a massive test, a sort of sporting petri dish.

Let’s hope, for the good of the game, that fans follow the rules and get to their seats at the allotted times.

No one wants to go back to empty stadia and applause at the press of a button.

10. Will England, Scotland or Wales win the trophy?

We can but dream.

Besides, it’s the taking part that counts, right?