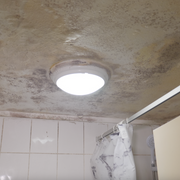 Two years on from Awaab Ishak’s tragic death, the housing estate where he was exposed to severe mould and damp hasn’t changed.

It remains a major problem – inside flats we visited living conditions are incredibly poor.

Nasif has lived in a ground floor flat for 16 years here, but the last eight he says have been "horrible". His bathroom is engulfed in mould and damp, the fan barely works and he now has two inhalers to help with his asthma.

"It’s really terrible to live here. How on earth can a normal person live in a flat like this? It’s really difficult" he told us.

He said how he was shocked to hear about the death of Awaab, but believes in another five or 10 years, if he’s still living there – he’ll be dead too.

"I’m using the medication the doctors have prescribed me, but I know it’s not enough. They’re not doing anything to get rid of this mess – living here scares me every day."

Nasif said he’s complained several times to Rochdale Boroughwide Housing (RBH), but they haven’t been to fix the issue.

RBH told Sky News in a statement: "This is a live disrepair claim, we are trying to gain access to carry out mould treatment works but the tenant is not replying to contact made by us via our contractor to carry out the works.

"We will reach out to make contact urgently with this tenant again as a result of your inquiry."

Sky News went inside other homes on the estate where severe cases of mould and damp were evident. In some flats, occupiers told us the housing association had been to paint over the mould just "a few weeks ago", but they were still scared following the coroner’s conclusion into the death of Awaab Ishak.

Uwezo lives with his sister and mum just below where Awaab was exposed to the horrific conditions.

He showed us his bathroom, also rife with black fungus on the walls and ceilings – which he says has impacted his mother’s health.

"It’s not safe here, the ventilator is too old and needs to be changed."

"We are breathing it in, and my mother now doesn’t have the best health. She’s breathing all this bad stuff and there are problems with her lungs."

Uwezo is urging the housing association and other authorities to move him to safer, more suitable accommodation.

Responding to this case, RBH said: "We completed works in January this year following a legal disrepair claim.

"There have been no reports to us since of any problems and the tenant has refused to give us access to carry out a further survey. We will reach out to make contact urgently with this tenant again."

Senior Coroner for Greater Manchester North Joanne Kearsley said, "this issue is simply not a Rochdale problem" and Awaab’s death "should be a defining moment for the housing sector", but it’s clear many issues still remain on the very doorstep of where Awaab’s life was cut short.