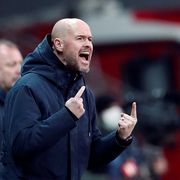 The Ajax boss will take over from Man Utd’s interim coach Ralf Rangnick in the summer.

Ten Hag said it was a "great honour" to be appointed manager and he was "hugely excited by the challenge ahead".

"I know the history of this great club and the passion of the fans, and I am absolutely determined to develop a team capable of delivering the success they deserve," he added.

The 52-year-old has signed a three-year deal with the option of a further 12 months.

Liverpool beat Manchester United 4-0 on Tuesday, with the defeat at Anfield signalling the scale of the task facing Ten Hag.

Manchester United has said it was "delighted" to make the announcement, with the team’s Twitter bio featuring the move to mark the news.

United’s football director, John Murtough, said Ten Hag has proved himself to be "one of the most exciting and successful coaches in Europe" during his four years at Ajax.

Ajax chief executive, Edwin van der Sar, has thanked Ten Hag and said: "He is going to make the step to one of the biggest clubs in the world, in a fantastic league", but added that he would have liked to have kept him for longer.

Former United defender, Rio Ferdinand, has told United fans on Twitter to "fasten the belts and enjoy the ride" following the confirmation.

Ralf Rangnick took over from Ole Gunnar Solskjaer, who was sacked by the club last November.

Rangnick is expected to step into a two-year consultancy role at Old Trafford.

Since Solskjaer was sacked, rumours surfaced that Ten Hag and former Tottenham coach Mauricio Pochettino were the favoured candidates.

Ten Hag is said to have been interviewed during the March international break and the club has now announced his appointment.

Read more: Why Ten Hag could be the one to bring success back to Old Trafford

The compensation to Ajax for Ten Hag leaving is understood to be £1.7m and Manchester United’s good relationship with former player Edwin van der Sar, who is now Ajax’s chief executive, is understood to have played a part in the negotiations.

Who is Erik ten Hag?

The Ajax boss has risen to become one of the most respected coaches in Europe in the past few years.

He led a young Ajax side to the 2019 Champions League semi-final, beating Juventus and Real Madrid en route.

His side lost to Tottenham in the semi-final after a late goal from Lucas Moura in the second leg.

Ten Hag started his managerial career at Go Ahead Eagles in the Dutch top flight in 2012 before moving to Bayern Munich’s reserve team a year later.

At the time Manchester City manager Pep Guardiola was in charge of Bayern Munich’s first team.

In 2015, he was appointed the sporting director and head coach of FC Utrecht, where he won the manager of the year award in 2016.

Two years later Peter Bosz, the Ajax manager at the time, moved to Borussia Dortmund after losing to Manchester United in the Europa League final.

Ajax initially appointed Marcel Keizer from its youth setup but he was sacked midway through the season and replaced by Ten Hag.

Ten Hag has won two league titles in the Netherlands.

Having worked under Guardiola, Ten Hag is a possession-based manager, who is keen on pressing from the front.