England will take the knee in Qatar, Gareth Southgate says 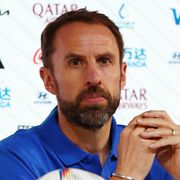 England will take the knee at the World Cup in Qatar, Gareth Southgate has confirmed.

It is "what we stand for as a team and have done for a long period of time", he said.

The Three Lions did not make the anti-racism gesture during their games against Germany and Italy in September, but will be doing so when they play Iran in their opening Group B match tomorrow.

"We have discussed taking the knee," Southgate said at a news conference in Doha. "We feel we should."

Before the start of the season, Premier League captains decided to limit taking the knee to certain games, including Boxing Day and the FA Cup and Carabao Cup finals.

"Of course we understand in the Premier League that the clubs have decided to only do that for certain games, big occasions," Southgate said.

"We feel this is the biggest and we think it’s a strong statement that will go around the world for young people, in particular, to see that inclusivity is very important."

Speaking at an earlier news conference, Rob Page, the Wales boss, was asked whether FIFA had tried to stop his team wearing an armband in support of LGBTQ+ rights.

Page replied: "No, we’ve said that the one love armband is what we’ll wear and it’s no different for us."

Harry Kane, the England captain, will also be wearing the armband in the match against Iran.

According to the laws of the game, found on the International Football Association Board’s website, "equipment" must not have any "political, religious or personal slogans, statements or images".

During the opening ceremony this afternoon, Sheikh Tamim bin Hamad Al Thani, the emir of Qatar, said: "From Qatar, from the Arab world, I welcome everyone to the World Cup 2022."

"How lovely it is that people can put aside what divides them to celebrate their diversity and what brings them together."

After he spoke fireworks exploded from the roof of Al Bayt stadium, about 30 miles north of the capital, Doha.

In the opening match of the tournament, Qatar were beaten 2-0 by Ecuador.