Ebola: New outbreak declared as officials warn ‘time is not on our side’ 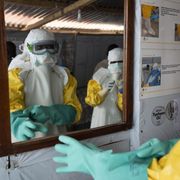 An outbreak of Ebola has been declared in the Democratic Republic of the Congo – four months after the last one ended.

A case was confirmed in a 31-year-old man on 5 April. He was admitted to an Ebola treatment centre on Thursday, but died hours later.

The World Health Organisation’s regional director for Africa, Dr Matshidiso Moeti, said: "Time is not on our side. The disease has had a two-week head start and we are now playing catch-up."

Overall, this is the 14th Ebola outbreak that the Democratic Republic of the Congo has seen since 1976, which is when the virus was first discovered.

Efforts to stem the current outbreak have already begun, with officials confirming that the patient who died has received a safe and dignified burial.

More than 70 of his contacts are also being traced – and vaccinations in the city of Mbandaka are going to be stepped up.

Ebola is transmitted by coming into contact with the bodily fluids of an infected person or contaminated materials.

Early symptoms include muscle aches and a fever, which resemble those seen in other common diseases such as malaria.

In past Ebola outbreaks, fatality rates have varied from 25% to 90% – but effective treatments are now available, and patients who receive care early see their chances of survival improve significantly.

Dr Moeti added: "The positive news is that health authorities in the Democratic Republic of the Congo have more experience than anyone else in the world at controlling Ebola outbreaks quickly."