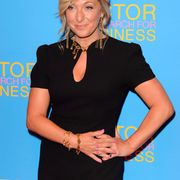 EastEnders star Tracy-Ann Oberman has agreed to pay "substantial damages" after accusing the founder of the Northern Independence Party of having a "Jew blocklist".

The actress, 55, who is best known for her role as Chrissie Watts on the BBC soap opera, acknowledged her allegations against Dr Phillip Proudfoot last year were "hurtful".

In a now-deleted Tweet, Oberman accused the humanitarian academic and founder of The Northern Independence Party of using an online tool to block interactions from Jewish users.

She wrote: "So a man called @Phillipproudfoot of @FreNorthNow has a Jew blocklist. I’ve been out of the Twitter politics loop for a few months but is this Party continuation of Corbyn? Seems like it. And will it end up the same? Seems like it. Good luck all."

Today, Oberman issued a statement on Twitter in which she apologised for her comments, admitted that she had "made a mistake" and said she had agreed to pay damages.

"On 4th of April 2021, I tweeted that Dr Phillip Proudfoot ‘has a Jewish blocklist’," she wrote.

"The following day Dr Proudfoot explained this was wrong and that he had ‘used a tool to mass block an account I followed that was involved in targeted trolling, which also blocks followers’.

"He has since assured me that this was an account he believed was trolling and harassing him and he had not deliberately blocked Jewish accounts. I accept that Dr Proudfoot had at no time had a Jewish blocklist and I apologise for stating otherwise."

Dr Proudfoot launched a libel case against the actress, claiming her allegation had caused serious harm to his reputation, particularly considering his status as a prominent academic.

Dr Proudfoot said in a statement: "When I founded the Northern Independence Party, I expected public scrutiny. Harmful defamation, however, is unacceptable.

"But it is harmful to allow the fear of false accusations to prevent us from speaking out against apartheid in Israel."

His lawyer, Zillur Rahman, of Rahman Lowe Solicitors, said he was "delighted" for Dr Proudfoot and it was a "resounding victory".

He added: "Antisemitism is a serious problem in our society and it is unfortunate that some people, like Philip, who show solidarity with the Palestinians in their struggle for freedom from Israel’s oppression, have been falsely accused of antisemitism, which can have a chilling effect on free speech against injustices and human rights violations."