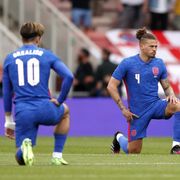 Downing Street has now told England fans not to boo the football team for taking the knee in protest against racial injustice.

Number 10 had previously declined to condemn those who booed players, instead only issuing a statement urging fans to be "respectful" and saying Boris Johnson "wants the whole country to get behind" Gareth Southgate’s side.

But a Downing Street spokesman said on Friday: "The prime minister respects the right of all people to peacefully protest and make their feelings known about injustices.

"I think the prime minister has spoken before about his desire to get everybody to get behind the national team and the PM would like to see everyone getting behind the team to cheer them on, not boo."

England players were met with boos by some fans when taking the knee at the Riverside Stadium in Middlesbrough prior to the friendly matches against Austria and Romania last week.

The team – who play their opening Euro 2020 match on Sunday – insist taking the knee is not a political gesture and the players are doing it to reinforce the message that racism and discrimination will not be tolerated.

In an open letter to England fans in The Players’ Tribune, England manager Gareth Southgate said he has "a responsibility to the wider community to use my voice, and so do the players".

He added: "It’s their duty to continue to interact with the public on matters such as equality, inclusivity and racial injustice, while using the power of their voices to help put debates on the table, raise awareness and educate."