Downing Street parties: Boris Johnson to face investigation into whether he misled MPs about partygate 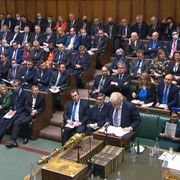 Boris Johnson is to face a parliamentary investigation into whether he misled MPs about lockdown-breaking parties at Downing Street.

MPs have backed a Labour-led motion calling for the privileges committee to examine allegations the prime minister misled the Commons when he denied lockdown rules were broken in Downing Street.

Tory MPs had earlier been ordered to back a government attempt to delay the vote until inquiries by the Met Police and civil servant Sue Gray have concluded.

In a late reversal shortly before the debate began, Commons Leader Mark Spencer said Tory MPs could vote however they wanted on Labour’s motion.

There had been speculation in Westminster that Tory MPs were not prepared to wait any longer for an investigation into Mr Johnson’s conduct.

It will not begin until Scotland Yard’s inquiry has finished.

The PM has faced persistent calls to resign over partygate and apologised to MPs this week in a performance high on contrition.

Defending Mr Johnson in the debate, Cabinet Office Minister Michael Ellis said the prime minister did not mislead the Commons, but made comments about partygate revelations "in good faith".

He added that Mr Johnson "has always been clear that he is happy to face whatever inquiries Parliament sees fit".

"He has responded to the event for which he has received a fixed-penalty notice," Mr Ellis said.

"He made clear that he did not think at that time, that the event was in contravention of COVID rules, however he has apologised for his mistake, paid his fine and accepted the findings of the Metropolitan Police.

"There is a difference between a deliberate and an inadvertent situation and I think most people would accept that."

Sir Keir Starmer accused Conservative MPs of failing to stand up for the values of "honesty and integrity" and said "Britain deserves better" than Mr Johnson.

"Today’s humiliating climb-down showed that they know they can no longer defend the indefensible," he said.

Labour’s deputy leader Angela Rayner reiterated her party’s call for Mr Johnson to resign, telling MPs that "the prime minister is leading the Conservative Party into the sewer".

The prime minister missed the debate in the Commons as he is away on a two-day official visit to India, where he told Sky News’ Beth Rigby he has "absolutely nothing to hide" on partygate.

In a blow to Mr Johnson, former minister Steve Baker, an influential Conservative MP, earlier said the prime minister "should be long gone".

Mr Baker, who was a prominent Brexiteer involved in ousting Theresa May, said: "Really, the prime minister should just know the gig’s up."

"It is utterly depressing to be asked to defend the indefensible. Each time part of us withers."

Johnson says he has ‘absolutely nothing’ to hide

Speaking to Sky News’ political editor Beth Rigby in India, the prime minister insisted he had "absolutely nothing, frankly, to hide" when trying to explain his decision to drop the government’s amendment to the Labour motion.

He added that he remains confident of leading the Tories into the next general election.

Meanwhile, responding to Mr Baker’s call for him to quit, Mr Johnson said: "I understand people’s feelings. I don’t think that is the right thing to do."

The Privileges Committee will, upon the conclusion of the Met Police’s investigation, determine whether Mr Johnson is in contempt of Parliament for misleading MPs with his repeated denials of lockdown-busting parties in Downing Street.

The motion tabled by Labour and the leaders of seven other opposition parties and nodded through by MPs stated that the prime minister made at least four separate remarks in the Commons which "appear to amount to misleading the House":

• On 8 December 2021, the prime minister told the Commons: "I have been repeatedly assured since these allegations emerged that there was no party and that no COVID rules were broken."

• Also on 8 December 2021, he said: "I am sickened myself and furious about that, but I repeat what I have said to him: I have been repeatedly assured that the rules were not broken."

• Finally on the same date: "The guidance was followed and the rules were followed at all times."

Met to go silent on partygate probe until after May elections

The Met Police have confirmed that they will not issue any further partygate updates before the May local elections.

Scotland Yard confirmed to Sky News that the investigation would carry on and officers would continue recommending fines – but the force will not put out media notices on referrals until after the polls on 5 May.

But Number 10 has pledged to confirm if the prime minister or cabinet secretary receive any fines before next month’s elections.

So far, more than 50 fines have been issued in relation to lockdown-breaking parties in Downing Street and across Whitehall.

Earlier on Thursday, Mr Sunak said he is "extremely and sincerely sorry" for the upset he caused by attending the rule-breaching gathering.

Speaking in Washington, where he will be attending the spring meeting of the IMF, Mr Sunak apologised for the "hurt and the anger" he had caused over his partygate fine and said he had "always acted in good faith" when discussing the matter in parliament.

The prime minister is thought to have been at more of the 12 events under investigation by Scotland Yard.