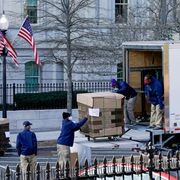 Donald Trump has called for "no violence" ahead of what the FBI has warned are "armed protests" being planned at all 50 state capitals ahead of Joe Biden’s inauguration – as removal vans were spotted outside the White House.

One group has vowed an uprising will take place and government offices will be stormed if attempts are made to remove Mr Trump from office.

Mr Trump, who did little to condemn last week’s riots in Washington DC as they took place, nor in the immediate aftermath, has in recent days tried to ease tensions.

"Mob violence goes against everything I believe in and everything our movement stands for," he said in a video released on a White House Twitter account – at the same time as he was being impeached for encouraging his supporters to storm the US Capitol in Washington DC last week.

He said the past year had seen political violence "spiral out of control" and "it must stop".

Mr Trump urged his supporters to "be thinking of ways to ease tensions, calm tempers and help to promote peace in our country".

He told them there "must be no violence, no lawbreaking and no vandalism of any kind" in the coming week.

His comments came as he was impeached by the House of Representatives on Wednesday for a historic second time.

Mr Trump is accused of inciting an insurrection following the deadly riots at the US Capitol on 6 January.

The final count was 232 to 197, with a total of 10 Republicans voting against their party and Mr Trump.

In a statement, Mr Biden said the House exercised its power to "hold the president accountable" – and urged the Senate not to become consumed by impeachment proceedings and lose sight of his legislative agenda and "the other urgent business of this nation".

When the Senate finally do put Mr Trump on trial, they will need a two-thirds majority to officially impeach him.

They can also vote to ban him from standing for election again – which only requires a simple majority.

However, it is currently unlikely that enough Republican senators will break ranks to convict Mr Trump.

Meanwhile, removal vans with pallets of unfolded boxes have steadily been arriving at 1600 Pennsylvania Avenue this week, with people also pictured loading cars with items from the West Wing of the White House.

Elsewhere, the boss of Delta Airlines said it had imposed bans on Trump supporters involved in disruption on recent US flights that targeted Mitt Romney and Lindsey Graham, Republican senators who have criticised the president.