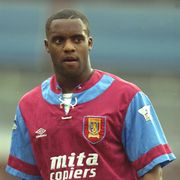 Former Premier League striker Dalian Atkinson "appeared to be making a growling sound" and was "unresponsive" after being arrested, a court has heard.

It was also claimed that PC Benjamin Monk rested his foot on Mr Atkinson’s head and shot him with a Taser for 33 seconds – more than six times longer than recommended.

Mr Atkinson, who was 48, died a little later in hospital.

Monk, 42, who denies murder and manslaughter, was called to Mr Atkinson’s father’s address in Meadow Close, Telford, at around 1.30am on 15 August 2016.

He and a colleague, PC Mary Ellen Bettley-Smith, 31, were responding to a 999 call reporting a disturbance.

Mr Atkinson had been shouting in the street, waking one of the neighbours, who called the police.

Bettley-Smith is on trial alongside Monk, charged with assault, which she denies.

The officer described how "Mr Atkinson appeared to be making a growling sound and in his view was still struggling".

Ms Healy added: "He could see the taser wires leading from his Taser to Dalian. Dalian appeared to be making a growling sound and to still be struggling."

Another officer, PC Julia Hiller, said the former Aston Villa striker "appeared to her to be semi-conscious and (was) making what she described as a rough gurgling sound," Ms Healy continued.

A further officer, referred to in court as PC Hughes, "could see straightaway as he approached that the man on the ground was not conscious as he did not speak and was unresponsive," said the QC.

"He could hear him breathing and that it was very strained," she added.

Ms Healy told jurors the standard default setting of a Taser is a five-second phase, but it is possible to override that by continuing to depress the trigger.

"PC Monk continued to depress the trigger for more than six times the length of a standard five-second phase," she said.

"The Taser was deployed for 33 seconds."

Jurors also heard that Mr Atkinson, who also played for Ipswich Town and Sheffield Wednesday, was kicked twice in the head by Monk "with enough force to leave the imprint of the pattern of the laces from the top of his boot on two separate areas of Mr Atkinson’s forehead".

Ms Healy told the court that PC Bettley-Smith "struck Dalian Atkinson repeatedly with an extended baton whilst he was lying on the ground, having been incapacitated on the ground by Taser".

Ms Healy told jurors that pathologists and a specialist in intensive care instructed by the prosecution had concluded that whilst Mr Atkinson’s underlying health conditions meant he was at a greatly increased risk of dying, were it not for the third Taser deployment and the kicks to his head, he would not have died that night.

Mr Atkinson, who suffered from several health issues including high blood pressure and heart disease, had become "disturbed and erratic", the court heard.

Mr Atkinson answered the door and was "unarmed", continued Ms Healy, and Monk attempted to taser him twice, but the gadget was "ineffective".

The ex-footballer punched a glass panel in his father’s front door "causing it to smash", before a further confrontation between him and the officers in the street where Monk fired a third Taser cartridge at him successfully, before kicking him in the head as he lay incapacitated on the ground.

Ms Healy said the two defendants claim they were entitled to use force because they feared for their safety.

"In kicking Dalian Atkinson in the head not once, but on two separate occasions, PC Monk was not, the prosecution say, acting in self-defence or in defence of another," she continued.

She added: "In kicking Dalian Atkinson to the head PC Monk can only, the prosecution say, have only intended to cause really serious injury."

A pair of forensic scientists examined Monk’s right boot and found bloodstains "on the laces and on the underlying tongue" which belonged to Mr Atkinson.

One of the scientists, Penelope Griffiths, said that in her expert opinion these findings could be explained if Monk had kicked Mr Atkinson "after he was already injured and bleeding".

Ms Healy went on to say that, when an officer known as Sergeant Sanders arrived at the scene, Mr Atkinson’s pulse was checked and it "appeared to be very weak".

The court heard an ambulance was called but Mr Atkinson, who had lost consciousness and was unresponsive, went into cardiac arrest en route to hospital and was pronounced dead at 2.45am.