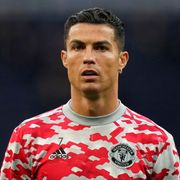 Cristiano Ronaldo has thanked the Anfield crowd for their show of compassion following the death of his newborn son.

A minute’s applause was held during Tuesday’s game between Liverpool and Manchester United.

Fans of both teams showed solidarity with the player and applauded in the seventh minute – the same as the Portuguese star’s number.

The footballer, 37, said on Instagram: "One world… One sport… One global family… Thanks, Anfield.

"Me and my family will never forget this moment of respect and compassion."

He added three hands-praying emojis alongside a video of the crowd’s touching gesture.

The footballer and his partner, Georgina Rodriguez, revealed on Monday that one of their newborn twins had died, while the baby girl survived.

They said it was "the greatest pain that any parents can feel", adding that their daughter’s birth "gives us the strength to live this moment with some hope and happiness".

The news led to an outpouring of support, with thousands of people commenting on the Instagram post, including fellow footballers and celebrities.

Ronaldo already has a four-year-old daughter with Ms Rodriguez, as well as three other children.