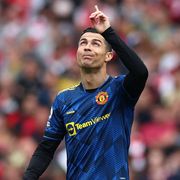 Football fans have paid a moving tribute to Manchester United’s Cristiano Ronaldo with loud applause during his return to the pitch following the death of his newborn son.

Saturday’s match at Arsenal’s Emirates Stadium was his first time back in action, and with seven minutes on the clock – the same number as the Portuguese star’s shirt – supporters of both teams rose to their feet to applaud him.

He went on to score his 100th Premier League goal, during the 33rd minute of the game in north London. Arsenal won the match 3-1.

Ronaldo had missed Tuesday’s clash at Anfield between Liverpool and Man Utd but said he was moved by a minute’s applause from supporters, also in the seventh minute.

On Monday, the Portugal and Man Utd star announced he and Georgina Rodriguez had lost their baby boy, shortly after Ms Rodriguez gave birth to twins.

The couple said they were "devastated" by the loss and called it "the great pain that any parents can feel".

Thousands of people commented with messages of support on the heartbreaking Instagram post, while others tweeted their tributes, including celebrities and footballers.

Manchester United’s Instagram account posted: "Your pain is our pain. Sending love and strength to you and the family at this time".

Ronaldo said both he and his family would "never forget this moment of respect and compassion".

On Friday, he shared a picture of his newborn daughter and said "now was the time to be grateful for the life" he and Ms Rodriguez had welcomed into the world.

Ronaldo already has a four-year-old daughter with Ms Rodriguez, as well as three other children.