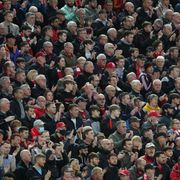 Liverpool and Manchester United fans put rivalries aside to pay tribute to Cristiano Ronaldo, after he announced his newborn son had died.

On Monday the Portugal and Manchester United star announced he and Georgina Rodriquez had lost their baby boy, shortly after Ms Rodriquez gave birth to twins.

Ahead of the match, the teams observed a moment of silence and wore black arm bands in tribute, while the football community also paid tribute on social media.

Despite a bitter rivalry between both teams dating back to the 19th century, fans came together in the seventh minute at Anfield with a minute’s applause – the same number Ronaldo wears for his club.

Manchester United’s interim manager Ralf Rangnick told Sky Sports before kick-off: "Of course, this is the worst that can happen.

"I’m a father with two sons myself so I’m fully aware what that means and we’re all behind him, we’re all with him and we wish him and his family that they are strong together."

Ronaldo missed the derby game as he was on compassionate leave.

Meanwhile, Manchester United dropped down to sixth place and lost further ground in the race for the final Champions League spot.