COVID-19: Who will be first to get a COVID booster jab – and when will they get them? 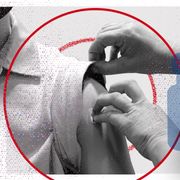 The UK government has announced that the nine groups most vulnerable to coronavirus will be eligible for a third booster vaccine no earlier than six months after their second.

The Pfizer and Moderna vaccines will be the main ones used in the initial rollout of third doses, which Health Secretary Sajid Javid said will start "from next week".

The Oxford-AstraZeneca jab has also been approved for use as a booster, but the Joint Committee on Vaccination and Immunisation (JCVI) will only recommend it for people who are allergic to the other two vaccines.

However, the director-general of the World Health Organisation (WHO), Dr Tedros Adhanom Ghebreyesus, has asked wealthier countries to halt booster jab programmes until at least the end of the year to allow poorer nations to catch up with first and second doses.

The co-developer of the Oxford vaccine, Dame Sarah Gilbert, has also said she "doesn’t think we need to boost everybody".

Here, Sky News looks at who will get booster vaccines, when, and what the scientific case is for using them.

Who is getting booster vaccines?

People who were in the JCVI’s original one to nine priority groups to get their first and second doses will get their third doses before anyone else.

They will be eligible for a booster jab when at least six months have passed since their second dose.

The initial booster rollout will be divided into two stages, with the JCVI considering third doses for people under 50 at a later date when more data is available.

The following people are expected to be called from next week:

• Adults aged 16 and over who are immunosuppressed

• Adults aged 16 and over who are clinically extremely vulnerable

"As soon as is practicable after Stage 1", the following people will be called:

The JCVI’s recommendations are for the whole of the UK, but it is up to ministers in each country how they use them.

In Scotland, First Minister Nicola Sturgeon has said the booster rollout will begin on 20 September with those in Stage 1.

Ministers in the other devolved nations will decide when their booster programmes can start based on NHS capacity.

Which vaccines will they get?

The UK regulator, the MHRA, has approved the Pfizer, Moderna and AstraZeneca vaccines for use as a booster.

But the JCVI has decided to only use the two mRNA vaccines – Pfizer and Moderna – for third doses for most people, as they have proven to have fewer side effects.

People who cannot have the mRNA vaccines because they are allergic or immunocompromised will be offered AstraZeneca, chairman of the JCVI Professor Wei Shen Lim told a Downing Street news briefing.

Everyone in the first two stages of the rollout will be offered a third dose of Pfizer as a priority, regardless of which vaccine they had for the first two jabs.

This means someone who had an AstraZeneca vaccine for doses one and two, may be given a different one for their third.

But they may also be given a half dose of Moderna as an alternative, as scientists say it has proven to give a good boost to immunity and is being recommended as a third dose to the European and US regulators.

Why does the government want people to have third doses?

Data has shown that the coronavirus vaccines currently in use in the UK offer at least six months of protection.

Beyond that, scientists believe immunity can start to wane and vaccines can become less effective.

In the UK, the JCVI has recommended third doses for certain, vulnerable groups, so they are not hospitalised with the virus and extra pressure is not put on the NHS.

Booster jabs would "ensure the protection that has been built up in the population does not decline in the winter months" as "NHS pressures are most acute" during that period, according to the JCVI.

Modelling also suggests that this year’s flu season could be earlier and up to 50% larger than usual, which would put even more strain on the health service.

This is why flu jabs will be offered alongside COVID boosters for vulnerable groups.

"And we know this winter could quite possibly be bumpy at times, so the mantra is to stay on top of things."

He added that it is safe to be given a COVID booster jab and flu vaccine together, but "not in the same arm".

What does the science say?

Government scientists have based their booster jab decision largely on the findings of the Cov-Boost trial.

Carried out by the University of Southampton on more than 2,800 people, it tested mixing different vaccines for booster doses.

Government advisers say they have a "preference" for the mRNA vaccines.

Professor Lim said this is because "they gave very good immune boosting response after two doses of either the Pfizer or AstraZeneca vaccine" during the trial.

On the decision to use a half dose of Moderna as a booster, he added that it "worked very well" because it was "easily tolerable".

Israel is the only country with any data on the efficacy of third vaccine doses outside clinical trials, as it was the first to start administering them.

People over the age of 60 began getting Pfizer booster jabs there at the end of July – provided they had their second dose at least five months before.

On 22 August, the Israeli health ministry published data that showed a third dose of Pfizer "significantly improved protection from infection and serious illness" for people in that age group.

It said protection against infection 10 days after a third dose was four times higher than after two doses.

And protection against serious illness or hospitalisation was between five and six times higher 10 days after the third jab, the study said.

What about the under-50s?

The government says it has no current plans to give boosters to all under-50s.

This is because there is not enough data to support doing so and immune responses are stronger and last longer in younger people.

"So it may well be that younger, healthier people may not need an earlier booster dose."

What is the case against third doses?

The main concern about booster jabs among scientists and public health experts is vaccine inequity.

Since the start of the pandemic, experts have warned it will not end until the majority of the world population is vaccinated.

WHO data shows that 5.5 billion doses have been given out so far – but 80% have been in middle-to-upper income countries.

According to the WHO: "Offering booster doses to a large proportion of a population when many have not yet received even a first dose undermines the principle of national and global equity.

"Prioritising booster doses over speed and breadth in the initial dose coverage may also damage the prospects for global mitigation of the pandemic, with severe implications for the health, social and economic well-being of people globally."

Wealthier countries are encouraged to donate COVID vaccines to poorer ones through WHO and UNICEF’s COVAX programme.

But despite one billion doses being offered to other countries so far, WHO director-general Dr Tedros says fewer than 15% of them have "materialised".

On 8 September, Dr Tedros called for a halt to any booster jab programmes until the end of the year to allow all countries to vaccinate at least 40% of their populations.

He added that he is "appalled" at claims by vaccine manufacturers that global supply can cover third jabs – while others have had none.

"I will not stay silent when companies and countries that control the global supply of vaccines think the world’s poor should be satisfied with leftovers," he said.

What about the most vulnerable?

Although it’s undecided on the overall efficacy of booster vaccines, WHO says that any third jab rollout should be "firmly evidence-driven and targeted to the population groups in greatest need".

It says that boosters should be considered if studies show protection from two doses is waning and if new COVID variants are able to bypass vaccines.

This is particularly important for people who are at greater risk of getting seriously ill or dying from the virus.

Dame Sarah Gilbert, who co-developed the Oxford-AstraZeneca vaccine, said this month that she "doesn’t think we need to boost everybody" as "immunity is lasting well for the majority of people".

But she did say the "immunocompromised and elderly will receive boosters".