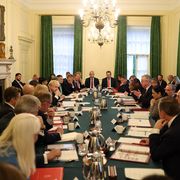 The health secretary has defended members of the cabinet not wearing face coverings during a meeting – saying they are "not strangers".

A photo of yesterday’s crowded cabinet meeting, with nearly 40 ministers and staff, showed none of them were wearing masks just hours before Boris Johnson laying out his winter plan, which included guidance that people should wear coverings in crowded spaces.

But Health Secretary Sajid Javid claimed ministers’ actions were "perfectly consistent" with that messaging. An open window could be seen in the room.

He told Sky News: "Because what we said was people should consider wearing masks in crowded places when they are with strangers, with people they’re not normally spending time with."

He admitted people were influenced by others, but said: "Every individual should make the decision based on the advice they’re given and the situation they find themselves in at the time."

The winter plan states: "Wear a face covering in crowded and enclosed settings where you come into contact with people you do not normally meet."

Mr Johnson also revealed on Tuesday there was a "plan B" for the winter in which face coverings would be made legally mandatory in certain settings, people would be asked to work from home and vaccine certificates would be necessary for nightclubs and at crowded events.

He said: "My biggest take of yesterday was seeing the health secretary talk about how we might have to ask people wear masks in enclosed spaces, in the workplace, surrounded by Conservative MPs, none of them wearing a mask, just gives me the sense of the complacency that I feel is sometimes too great a feature of the government."