COVID-19: PM set to announce relaxation of UK rules over Christmas – and pub closing time could be extended beyond 10pm 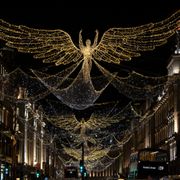 Boris Johnson is poised to announce up to a week of relaxed COVID-19 restrictions at Christmas – but tough rules will remain in force in England after the national lockdown ends on 2 December.

It’s understood the aim – subject to agreement from the governments of Scotland, Wales and Northern Ireland – is for a UK-wide softening of rules so that several households can join in one "bubble".

That system will reportedly be in force from 22 to 28 December.

It is also likely that, under the "four nations" plan, families will be allowed to attend Christmas church services and that pubs and restaurants may be able to open for a limited period over the holiday period.

It’s understood that when lockdown ends the 10pm curfew for bars and restaurants could be extended by an hour. Last orders would still be called at 10pm, but people would have until 11pm to finish their food and drink.

The prime minister, still isolating in Downing Street, will chair a rare Sunday afternoon cabinet meeting, and then on Monday he will make a Commons statement to MPs and publish his "COVID Winter Plan".

Foreshadowing the prime minister’s Commons statement, Number 10 said: "It will also set out how people will be able to see their loved ones at Christmas, despite ministers being clear this will not be a normal festive period."

Professor Calum Semple – a member of government advisory body SAGE – told Sky’s Sophy Ridge on Sunday that "hopefully" some rules could be relaxed over Christmas "for a few days", but added: "There will be a price for that."

He said he broadly agreed with the idea floated by Public Health England earlier this week that for every day of looser restrictions five days of extra lockdown might be needed.

However, he said assumptions should not be made about how tough the rules might be if extra days are added, saying it did not necessarily mean "draconian restrictions".

In his statement to MPs, Mr Johnson will confirm that England’s national lockdown will end on 2 December, but the country will move back into a three-tier system of regional restrictions, which was in force from 14 October until 5 November.

But Downing Street has also confirmed that while some local measures will be similar to those in place previously, the tiers will be strengthened in some areas to safeguard gains made during the national lockdown.

Ministers will announce on Thursday which areas in England will be in each tier, but the government has signalled that more areas will be in higher tiers to keep the virus under control and avoid another national shutdown.

"Everyone’s efforts during the current national restrictions have helped bring the virus back under control, slowed its spread and eased pressures on the NHS," a Number 10 spokesperson said.

"But the prime minister and his scientific advisers are clear the virus is still present – and without regional restrictions it could quickly run out of control again before vaccines and mass testing have had an effect."

But rebel Tory MPs have served notice that they will oppose the prime minister’s plans for restrictions to replace the national lockdown without extensive evidence they will save more lives than they cost.

The pair have written to Mr Johnson with their demands, in a letter it is claimed has been signed by 70 unidentified Conservative MPs.

In the letter, the MPs complain: "Even the tiered system of restrictions infringes deeply upon people’s lives with huge health and economic costs.

They call for the government to publish a "full cost-benefit analysis" of the proposed restrictions, as they warn "the lockdown cure prescribed runs the very real risk of being worse than the disease".

The Downing Street statement added: "The COVID Winter Plan will also set out how scientific advances in vaccination, treatments and testing will help enable life to gradually return closer to normal.

"Next month, the vaccination programme will begin – provided regulators approve the vaccines – and increases in mass testing will allow us to identify and isolate people who don’t have symptoms.

"It is the prime minister’s hope and belief that progress in mass testing can – if everyone continues to pull together – provide a way to suppress the virus and relax restrictions until a vaccine becomes available."