COVID-19: Over-50s and care workers among those to be offered booster jabs from next week 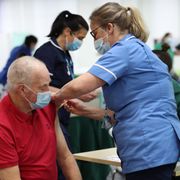 Booster COVID jabs will be offered to people aged 50 and over, those in care homes, frontline health and social care workers and any vulnerable people over 16, the government has announced.

The Joint Committee on Vaccination and Immunisation (JCVI) said there is a preference for mRNA COVID vaccines based on trial outcomes, with a first choice for a booster being the Pfizer vaccine, or alternatively, a half-dose of a Moderna jab as it works just as well.

Those who are unable to have an mRNA vaccine due to allergies should have an AstraZeneca vaccine booster.

A third dose should not be given until six months after a person has received a second shot, the committee added.

The governments of each UK nation has accepted the advice and the programme will begin next week.

Health Secretary Sajid Javid told the Commons on Tuesday: "I can confirm I’ve accepted the JCVI’s advice and the NHS is preparing to offer booster doses from next week."

He said eligible people will be contacted by the NHS to come for their booster.

JCVI chair Professor Wei Shen Lim told a news conference: "Getting a dose too early may mean they do not need it as they still have a high level of protection, and as we’ve seen with the gap between the first and second dose, you don’t want to have it too early."

He said a recurrent booster every six months may not be needed but it is too early to say.

Prof Lim added that the booster advice is just for this winter and younger people may not need a booster, but the JCVI will advise on that at a later date.

He said the booster programme does not mean people should not get their first and second COVID vaccines if they have not already.

The consultant respiratory physician also said people should still have a flu vaccine and can have the booster and flu jab at the same time – although this may not be practically possible for vaccine centres.

Prof Van-Tam said a jab that combines both vaccines could be developed in future.

He added there is no preference for Pfizer or Moderna but there are more Pfizer jabs available.

"Having seen the data and sat in on the JCVI meetings, I would be perfectly content, as a 57-year-old and a healthcare worker, to be offered either the Pfizer or Moderna," he said.

Prof Van-Tam warned of a "bumpy" winter ahead despite the vaccines having been "incredibly successful" and had so far prevented an estimated 24 million COVID-19 cases and 112,000 deaths.

"But we also know that this pandemic is still active. We are not past the pandemic, we are in an active phase still," he said.

"We know that this winter could quite possibly be bumpy at times and we know that other respiratory viruses such as flu and RSV (respiratory syncytial virus) are highly likely to make their returns."

The director general of the World Health Organisation has said that rolling out booster campaigns to more than just vulnerable people was "really not right".

Dr Tedros Adhanom Ghebreyesus said countries should think twice before doing so, noting there was still not enough evidence to show that booster jabs are required.

Answering a question on third doses for TRT World at a WHO briefing focused on Africa and COVID-19 vaccine equity, Dr Tedros said: "The moratorium for use for boosters, which I asked should last up to the end of this year, covers the immunocompromised specifically, not beyond that.

"We said it many times.

"We had a meeting recently of 2,000 scientist coming from all over the world who discussed on the same issue and there is nothing conclusive on the use of boosters for the time being.

"Until we have conclusive evidence it’s very important to hold it."