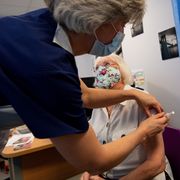 A regional breakdown of England’s vaccines rollout shows the Midlands leading the way in the number of jabs administered, while London has the lowest vaccination rate.

The city’s mayor Sadiq Khan has claimed the capital is not getting its fair share of doses, saying he is "hugely concerned".

He said he would hold talks with vaccine minister Nadhim Zahawi "to ensure that we urgently receive an amount of the vaccine that reflects our size, density and the level of need in our city".

He tweeted that he was "delighted" with the news, adding: "We’re accelerating the COVID vaccine rollout across the UK."

Analysis of the latest data by Sky’s Paul Kelso and Ganesh Rao points to London having the lowest vaccination rate of the regions.

Just 2.9% of people of all ages in the capital have received at least one dose of a COVID-19 vaccine – well below the 5.5% who have been reached in the North East and Yorkshire, the best-performing NHS region in terms of total coverage.

London and the East of England also have the lowest coverage of the most vulnerable over-80s cohort, according to the figures.

Fewer than 30% of of that age group have had the vaccine in the East of England, rising to 31.4% in London.

The highest rate for octogenarians is in the North East and Yorkshire, where 47.1% have been vaccinated.

The North West has almost 39% coverage, the South West and South East more than 37% and the Midlands more than 36%.

Mr Khan said: "I am hugely concerned that Londoners have received only a tenth of the vaccines that have been given across the country.

"The situation in London is critical with rates of the virus extremely high, which is why it’s so important that vulnerable Londoners are given access to the vaccine as soon as possible."

But Downing Street defended the operation, with the Prime Minister Boris Johnson’s official spokesman telling reporters: "We’ve rolled out the vaccination programme across the country and we’ve ensured that every area receives a fair share of the vaccinations and we will continue to do that.

"You will continue to see the vaccination programme accelerate through this month and throughout February and the PM’s been clear that we will ensure there is a vaccine centre close to everybody by the end of the month."

The NHS also insisted London is getting its "fair share" of vaccine supply with "a quarter of a million Londoners receiving their first vaccination" against the virus.

A spokesman for the NHS said: "We have more than 100 vaccination sites up and running across London, including the NHS COVID-19 vaccination centre in the ExCeL London, and more are opening all the time."

The figures come ahead of UK daily vaccinations data due to be released later today by Public Health England.

In Northern Ireland, more than 100,000 doses of the vaccine have been administered, with 91,419 people having received their first dose by Tuesday evening.

The prime minister has previously acknowledged the vaccine rollout is going at an uneven pace.

GPs have also reported delays or cancellations with supplies of the Pfizer/BioNTech vaccine, which was the first jab to be approved and used in the UK.

Margaret Keenan, 90, who became the world’s first patient to receive the Pfizer vaccine outside a clinical trial on 8 December, received the jab at Coventry’s University Hospital.

On Wednesday, as the PM promised the vaccination programme would be operating 24/7 "as soon as we can", he told MPs some parts of the country were doing "incredibly well" in vaccinating people, but the situation was "less good" in other areas.

The NHS needs to accelerate inoculations to meet Mr Johnson’s pledge to offer the UK’s four most vulnerable groups a COVID-19 vaccine by the middle of February, amounting to nearly 15 million people.

Six pharmacies today joined the race and started vaccinating people from the priority groups, which includes residents and staff in care homes, front line health and social care workers, all those aged 70 and over, plus the clinically extremely vulnerable.