COVID-19: How many more people could die of coronavirus in UK and how will European countries fare? Here’s what the data suggests 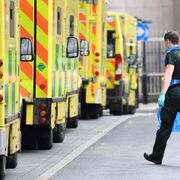 How many more people might die of COVID-19 in the UK?

The question, unpalatable as it is, is worth asking for a few reasons.

The first is that while the death toll from the pandemic is not mounting at anything like the rate it was in spring 2020 or last winter, it is, nonetheless, creeping higher.

The latest figures, released on Tuesday by the Office for National Statistics, showed the death toll in the UK had reached 167,646. Given that many of the worst-case scenarios early in the pandemic had talked of tens of thousands of deaths, even now this figure remains shocking.

Of course, the vast majority of those deaths happened in the first two waves – just under 57,000 in the first one, and almost 95,000 in the second – but there have been 16,163 deaths since May, despite Britain having a high level of vaccination.

Cases are rising again in much of Europe – sharply in the case of countries like Germany, the Netherlands and Austria, with the latter going back into a full lockdown as a result.

Some have warned that the UK could face another cruel winter of COVID-19 deaths and are pushing for more restrictions; the government insists it sees nothing in the data so far to push it from its "Plan A".

So the question is of more than passing importance: how many people would die if the UK really did face another wave of the virus? How does this compare to other countries around Europe?

Working out an answer is less simple than you might have thought, for not only do you need to weigh the levels of vaccination here and in other countries, you also need to look at age breakdowns and at the proportion of each country which has been infected in the past.

Happily, a group of epidemiologists at London School of Hygiene and Tropical Medicine (LSHTM) have just done that.

Their modelling is an illustration of the number of people who might be hospitalised or die if the country were to be wholly infected with COVID at this point.

There are many provisos: it doesn’t ponder the efficacy or waning of different vaccines; it doesn’t adjust for the risk of new variants of the disease. It is an illustration of what could happen if everyone in the population were exposed to COVID right now – not a prediction of what is going to happen.

Even so, the findings from the LSHTM study are strikingly encouraging, for the UK at least.

It found that there could be 10,479 more deaths in England.

Consider: this is less than the 12,540 that have died since May, and infinitesimally smaller than any of the previous waves of deaths.

Their model looked at England rather than the UK because of the availability of data, but it’s likely that the rest of the UK would see broadly similar results.

Population-adjust the figures, and compare them to the rest of the Europe, and the news is similarly reassuring.

It’s a similar picture for hospitalisations: according to the LSHTM modelling England would face fewer hospitalisations than other European countries even if the virus in its current form were to infect everyone in the country.

What’s particularly striking is how much higher many other European countries are on this metric: Germany faces potential deaths of 137 per 100,000; the Netherlands 92 per 100k, Austria 60 per 100k.

The numbers imply that the threat of mortality in many of these countries, which are now facing steep rises in infections, is considerably greater than in England. In some countries the risk is higher still: in Greece the potential deaths are 151 per 100,000 and in Romania it’s 356 per 100,000.

Why these stark differences?

In large part the answer is precisely what you’d expect: Britain has higher levels of vaccinations, especially among the elderly, than countries like Germany, Austria or Romania. It has slightly higher levels of natural antibodies from previous infection as well.

This modelling is an illustration, not a prediction – and comes with plenty of provisos.

The fact that it suggests such a low level of potential deaths has to be set against the very high number of deaths in the UK during the previous waves of the pandemic.

But still: if it is to be believed, it’s quite plausible that even a sharp rise in COVID cases could be absorbed in the UK without anything like the mortality levels of previous waves; nothing like it.