COVID-19: How European nations are trying to plot route out of lockdown 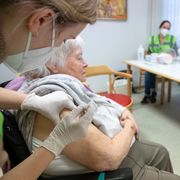 The details of England’s route out of lockdown were revealed this week.

Prime Minister Boris Johnson says he is "very optimistic" he will be able to remove all coronavirus restrictions by 21 June under his four-stage plan.

But how are European countries faring in the second year of the pandemic?

Chancellor Angela Merkel has told politicians in her conservative party that the country is in a third wave of COVID-19, Reuters reported, citing two sources at the meeting.

And she warned that any easing of lockdown measures introduced late last year and extended until 7 March would have to be done carefully and gradually.

She added that making rapid tests more available and boosting testing capacity could make a return to normality more durable, said the sources.

The German government is reworking its strategy to vaccinate the nation against COVID-19 as its campaign has faltered due to a lack of supply and public resistance to the Oxford/AstraZeneca shot.

That vaccine has met resistance in Germany and other European countries after some trials showed it to be less effective than alternatives from Pfizer and Moderna.

But research from Scotland said that four weeks after receiving the initial dose, the Oxford/AZ jab appeared to reduce a person’s risk of hospital admission by 94%.

German leaders have launched a public relations push to reassure the public that the Oxford/AZ shot works, and teachers will now get priority access to the vaccine.

Schools have reopened for younger pupils in more than half of the 16 states after two months of closure.

Germany’s disease control agency said there were 4,369 newly-confirmed cases and 62 deaths in the past day, though Monday’s numbers are often low due to reporting delays over the weekend.

Germany has also extended checks at its borders with the Czech Republic and Austria’s Tyrol province until 3 March.

The restrictions were introduced on 14 February to limit the spread of coronavirus variants in those areas. The only people allowed over the borders are Germans and German residents, truck drivers, health workers and a few others but all have to show a negative COVID-19 test.

But the European Commission has given Germany – along with Belgium, Denmark, Finland, Hungary and Sweden – 10 days to justify their border closures which justice commissioner Didier Reynders said had "gone too far".

The Alpes-Maritimes region, which includes the towns of Nice and Cannes, is adding daytime weekend lockdowns to its 12-hour nightly curfew which has been in force nationwide since January.

For at least the next two weekends, most people will only be allowed to leave home for food, medical appointments, to walk pets or for one hour of physical exercise.

Meanwhile, Dunkirk’s mayor has urged a ban on public gatherings there until at least mid-March as the area grapples with one of the highest coronavirus infection rates in France.

The Italian government has extended a ban on non-essential travel between the country’s 20 regions until 27 March as it looks to slow the spread of highly contagious coronavirus variants.

Officials also said the health ministry was likely to accelerate vaccination efforts by telling regions to use all available doses rather than set aside some stock for second shots.

The ban on travel between regions was introduced just before Christmas and had been due to expire on 25 February but officials fear a relaxation of restrictions could lead to a new surge in cases, driven by the variant first detected in the UK.

In its first decisions on COVID-19, Prime Minister Mario Draghi’s new cabinet also extended restrictions on visiting family and friends, with no more than two adults allowed into another person’s home at the same time.

The head of Spain’s health emergency coordination centre Fernando Simon has warned restrictions should not be loosened.

Infections, deaths and hospitalisations have fallen and more than one million people are fully vaccinated, so some regional governments have reopened bars and restaurants, reduced curfews or allowed small gatherings of people.

While the number of COVID-19 infections in Portugal is falling, hospitalisations and intensive care cases are declining far more slowly.

The national lockdown, which was put in place on 15 January, shutting non-essential services and schools, is expected to stay until at least the end of March.

Portugal, a nation of just over 10 million people, faced its toughest battle against the coronavirus pandemic last month and for weeks it had the world’s worst surge.

The outbreak has eased due to the lockdown, with daily case and death tolls falling rapidly to just 63 deaths and 1,032 new cases on Tuesday – levels last seen in October when businesses were still open.

But the number of people in hospital remains around double the level authorities say must be reached to alleviate measures.

Like most other countries in the region, he is trying to balance fears of a resurgence with growing lockdown fatigue.

New infections have been dropping for weeks after lockdown was tightened in mid-December.

Mr Rutte is expected to allow high schools to reopen for a limited number of hours and to allow hairdressers to reopen next week. But non-essential shops, restaurants and bars are expected to remain closed except for takeaways.

Quarantine requirements for incoming travellers were lifted for those who have certificates saying they have been vaccinated with an EU-approved vaccine.

There is also an exemption from the 10-day quarantine for kindergarten children, primary school pupils and those taking care of them, as well as researchers.