COVID-19: Gyms and non-essential retail to reopen in lead-up to Christmas 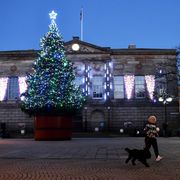 Boris Johnson is hoping to lace his latest COVID crackdown with more good cheer, with ministers working on plans to allow families to meet up in a festive bubble.

He is unveiling a new blueprint to fight the pandemic that he hopes will not only save lives during the winter but also prevent a Commons revolt by rebel Tory MPs.

Live COVID-19 updates from the UK and around the world

The prime minister is publishing a COVID Winter Plan, which will include tough new restrictions in England in December but a break of up to five days for Christmas.

But despite the restrictions, due to replace England’s national lockdown when it ends on 2 December, Mr Johnson will announce:

In a Commons statement, Mr Johnson is not expected to confirm how many households will be able to bubble together at Christmas, or how long the break in restrictions will last. That is planned for the following day.

But ministers are working on plans for three households and a five-day break, from Christmas Eve to 28 December, subject to agreement from the Scottish, Welsh and Northern Ireland governments.

The mass coronavirus testing programme will be launched in areas facing the toughest restrictions, in Tier 3, using the Liverpool model, which the government claims has been a success.

Announcing the testing programme, the prime minister is expected to tell MPs: "The selflessness of people in following the rules is making a difference.

"The virus is not spreading nearly as quickly as it would if we were not washing our hands, maintaining social distance, wearing masks and so on.

"And in England, where nationwide measures came into effect at the start of this month, the increase in new cases is flattening off.

"But we are not out of the woods yet. The virus is still present in communities across the country, and remains both far more infectious and far more deadly than seasonal flu.

"But with expansion in testing and vaccines edging closer to deployment, the regional tiered system will help get the virus back under control and keep it there."

Plans for a Christmas break from restrictions were announced after weekend talks with the first ministers of Scotland, Wales and Northern Ireland – Nicola Sturgeon, Mark Drakeford and Arlene Foster.

The government is proposing "some limited additional household bubbling for a small number of days". But the public is being urged to remain cautious and avoid travelling wherever possible.

But just hours after the announcement of the festive break was announced by the Cabinet Office, the Scottish government claimed: "No agreement has been reached and discussions are continuing."

Ms Sturgeon has said "we’re making progress towards a common position across the UK" on an easing of COVID-19 restrictions around Christmas, with it "likely [that] some households may be able to form slightly larger bubbles with each other for a short period over Christmas".

Welsh Health Minister Vaughan Gething said the four nations are discussing "the potential for a limited period of time to have some relaxation" of the rules.

This was echoed by Health Secretary Matt Hancock, who told Sky News a final decision "hasn’t been made".

Speaking to Kay Burley, he said: "We’ll confirm it when we have that agreement across the four nations."

Mr Hancock added: "We’ve agreed in principle that there should be a set of rules that applies across the board that is balanced, that allows a little bit more freedom, but is still safe."

The dispute may be over the dates of the break. Last week Scotland’s First Minister Nicola Sturgeon said for some families in Scotland Hogmanay would be more important than Christmas.

Labour’s shadow health secretary Jonathan Ashworth told Sky News: "We understand that people will want to come together, but this still remains a very serious, horrific and deadly virus, so please be cautious."

And he added that the PM needs to "be honest with the British people" about the tough new restrictions.

"If areas are continuing in these localised lockdowns, we hope there is a proper package of support for the small businesses impacted," Mr Ashworth said.

In the Commons, Mr Johnson will also face fierce criticism from a growing number of Conservative MPs of his plans to re-impose the three-tier restrictions in England which were in force from 14 October until 5 November.

Although the PM will reaffirm his pledge to end England’s national lockdown, many Tory MPs are furious at the government’s plans to make the restrictions tougher and place more areas in Tiers 2 and 3.

The Covid Recovery Group of Conservative MPs, led by ex-ministers Mark Harper and Steve Baker, has written to the prime minister threatening to vote against the three-tier system when it is voted on in the Commons.

Mr Baker told Kay Burley: "We’re determined to do our duty and help the government to come up with the right solutions."

He added: "Each measure needs to be shown to actually reduce the transmission of COVID and some of the measures can’t be shown to do that, not in a material way. Things like closing non-essential retail that’s COVID safe.

"We also want to see a cost benefit analysis for each measure, so that we can see that the measures will save more lives than they harm."