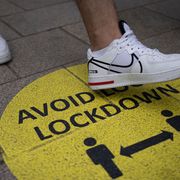 England’s R number has jumped to between 1.2 and 1.4, with the North West affected the worst , according to new figures.

R represents the average number of people each person with COVID-19 goes on to infect, so for every 10 people with COVID this week will go onto infect between 12 and 14 other people.

Last week, the estimated R number was between 1 and 1.2 in England.

An outbreak can grow exponentially when the figure is above 1. When it is below 1, it means the epidemic is shrinking.

The rate at which cases are growing in England is between 3% and 6% per day, an increase on last week’s daily growth rate, which was 0% to 3%.

The North West has the highest R number and growth rate while the North East and Yorkshire has the lowest.

These are the regional R numbers (first) and growth rates (second):

NHS England said particular care should be taken with numbers from the South West as they are based on low numbers of cases, hospital admissions or deaths and/or dominated by clustered outbreaks so may not reflect the entire region accurately.

The North West has been hit the worst by cases of the Delta (Indian) variant, which Public Health England (PHE) revealed on Friday is 64% more transmissible indoors than the Alpha (Kent) variant.

The region accounts for 19.5% of all Delta variant cases in England, of which there were 29,982 in total in the week up to 7 June, the latest PHE data shows.