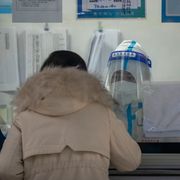 China has announced its first death from COVID-19 in nearly six months as tough new measures are imposed in Beijing and across the country as it battles outbreaks.

The death of the 87-year-old man in the capital was the first reported by the authorities since May, bringing the total official toll to 5,227.

China announced on Sunday that 24,215 new COVID-19 cases had been detected over the previous 24 hours.

Although the country has an overall vaccination rate of more than 92% who have received at least one dose, that number is much lower among the elderly, particularly those aged over 80, where it falls to just 65%.

The vaccination status of the latest coronavirus victim has not been released.

The gap in coverage is seen as one reason why China has mostly kept its borders closed and is sticking with its rigid "zero-COVID" policy that seeks to wipe out infections through lockdowns, quarantines, case tracing and mass testing, despite the impact on normal life, the economy and rising public anger at the authorities.

China says its strict approach has paid off in much lower numbers of cases and deaths than in other countries, such as the US.

With a population of 1.4 billion, China has officially reported 286,197 cases since coronavirus was first detected in the central Chinese city of Wuhan in late 2019 – a figure that differs significantly from other official estimates.

The World Health Organisation says there have been 9.4 million confirmed cases in China, while the Johns Hopkins University tracker puts the number at 3.3 million.

The US, with its population of 331.9 million, has recorded 98.3 million cases and a million deaths, since the virus first appeared there in 2020.

China’s figures have been challenged given the ruling Communist Party’s reputation for manipulating figures, the lack of scrutiny and subjective criteria for determining cause of death.

Unlike in other countries, the deaths of patients who had COVID-19 symptoms were often attributed to underlying conditions such as diabetes or heart disease, leading to undercounting.

Critics point to this year’s major outbreak in Shanghai, where the city of more than 25 million only reported a few dozen coronavirus deaths.

There has been mounting public anger of the "zero COVID" approach, heightened after a four-month-old girl died while in quarantine at a hotel in Zhengzhou when her father’s attempts to seek medical help for his sick baby daughter were refused.

It is among a number of cases to have fuelled an anti-enforcement backlash.

Clashes between authorities and residents frustrated with restrictions have been reported in numerous cities despite tight controls on information.

In response to outbreaks, a new round of mass testing has been ordered in a district of the southern city of Guangzhou that has seen tensions with migrant workers shut out of their homes.

Nearly three years into the pandemic, while the rest of the world has largely opened up, China has mostly kept its borders closed and discouraged travel even within the country.

In Beijing, residents have been told not to travel between city districts and large numbers of restaurants, shops, office buildings and apartment blocks have been closed or isolated.

Schools in urban areas of the city of 21 million have been moved online.

The Chinese regime has resisted calls to cooperate fully with the investigation into the origin of the virus, angrily rejecting suggestions it may have leaked from a Wuhan lab, and sought to level accusations at the US military instead.