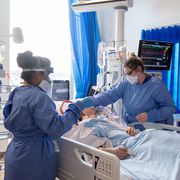 "Infection with SARS-CoV-2 leads to antibody, B cell and T cell responses in almost all individuals, which are sustained for over eight months after infection," the government’s NERVTAG group said on Friday.

The last major study of COVID immunity in the UK only found evidence of six months’ protection.

NERVTAG said that people who contract COVID-19 have an 81% chance of not being reinfected or developing symptoms from the virus again for at least seven months.

All data is based on people testing positive from a PCR test.

It comes after other data from the Office for National Statistics earlier this week suggested that eight in 10 adults now have coronavirus antibodies, meaning they’ve either been infected or vaccinated.

But the amount of antibodies people have will depend on factors such as how recently they were infected, how many vaccine doses they’ve had, and the time since their last jab.

The NERVTAG scientists also said that new variants could reduce levels of immunity.

"Increased viral transmissibility, such as that reported for the B.1.1.1 (Kent) variant… could shorten the duration of effective immunity," their latest report said.

Separate Public Health England (PHE) data published on Friday revealed that the Delta (Indian) variant is 64% more contagious than the Alpha (Kent) one.

PHE experts have also found that vaccines could be less effective against it.

It’s been revealed this week that the Delta variant now accounts for more than 90% of new cases in the UK.

Meanwhile, there remains not enough data to determine whether antibody immunity offers protection against passing on the virus to other people.

But NERVTAG said: "The presence of neutralising antibody is associated with a reduction in shedding of the infectious virus."

Higher case numbers and the rise of the Delta variant have cast doubt on the government’s hopes to ease England’s COVID restrictions fully on 21 June.