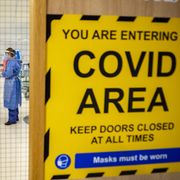 No lies were told to the prime minister over the COVID care homes crisis; a "reasonable worst-case scenario" predicted 820,000 deaths in January 2020; and Downing Street operates "better" without Dominic Cummings, Matt Hancock has said.

Appearing before MPs, the health secretary defended the government’s handling of the coronavirus crisis and said he acted with "honesty and integrity" throughout.

Here are the key topics that were covered:

The health secretary said the government followed the "clinical advice" at all times when it came to care homes, where thousands of COVID deaths occurred.

This is one of the key claims from Mr Cummings, who said the health secretary had lied about whether untested hospital patients could be discharged into care homes.

Addressing the allegation in his evidence session, Mr Hancock said: "We set out a policy that people would be tested when tests were available – and then I set about building the testing capacity to be able to deliver on that."

The health secretary revealed that initial calculations on January 31 2020, based on the Spanish flu pandemic, had suggested there could be 820,000 deaths. Government figures show the UK has had 127,860 deaths within 28 days of a positive test.

"And it was signed off at COBRA on January 31, and that was a planning assumption for 820,000 deaths, and I was determined that that would not happen on my watch."

The first nationwide lockdown in the UK was imposed on 23 March, over seven weeks after Mr Hancock said he received this modelling.

An earlier lockdown would have been ‘against scientific advice’

Despite telling the committee that by 9 March "the data started to follow" modelling suggesting a "reasonable worst-case scenario" of 820,000 deaths, the health secretary said an earlier lockdown would have meant going against scientific advice.

Mr Hancock said ministers "didn’t know how long" people would put up with lockdown measures, adding: "These are huge decisions; to take those decisions against the scientific advice is an even bigger decision to take.

"Challenging the scientific advice is one thing, but overruling a scientific consensus is much harder, especially when the costs of the lockdown are immediate and are obvious."

World Health Organization treated evidence from China as a ‘mistranslation’

Mr Hancock said he first heard evidence from China that there was asymptomatic transmission of the disease in January 2020 and "bitterly regrets" that it was not followed up sooner.

"I was so worried about it I arranged a call with the World Health Organization. I was told on that call with respect to China this was ‘likely a mistranslation’," he said.

The health secretary added: "I was in a situation of not having hard evidence that a global scientific consensus of decades was wrong but having an instinct that it was.

"I bitterly regret that I didn’t overrule that scientific advice at the start and say we should proceed on the basis that there is asymptomatic transmission until we know that there isn’t rather than the other way round."

Closing the borders sooner would have made ‘difference of a week’

The government was told closing the borders would only have made a week’s difference, according to the health secretary.

Mr Hancock said officials had chosen not to close the borders because it was advised by scientists that "unilaterally taking action" would "only make a difference of a week".

He added that both the US and Italy closed their borders to China sooner but still struggled with coronavirus surges later in the pandemic.

"The only way this could have been stopped getting out of China is if China stopped people getting out itself," the health secretary said.

There was ‘never a national shortage’ of personal protective equipment (PPE)

Mr Hancock told the committee there was "never a national shortage" of PPE but admitted there were "local pressures".

But, on 17 April, the government issued guidance stressing that protective equipment could be reused, which stated: "Compromise is needed to optimise supply in times of extreme shortages."

In a post on social media, the shadow minister for mental health and A&E doctor said: "Matt Hancock says there was never a shortage of PPE. It’s insulting to all the frontline staff who didn’t have the right masks or who were given inferior gowns. They were put at unnecessary risk."

No 10 is ‘better’ since Mr Cummings’s departure

Striking back at Mr Cummings who levelled many explosive allegations against the health secretary in a committee evidence session last month, Mr Hancock said the government "has operated better in the past six months" since the prime minister’s former senior aide left his Downing Street position.

Asked why there appeared to be some issues between Mr Hancock and Mr Johnson’s former senior aide Mr Cummings, the health secretary said he had "no idea" how this happened.

He added that he was aware Mr Cummings had been pushing the prime minister to fire him as someone had briefed the newspapers.

At the beginning of the session, Conservative chairman of the Science and Technology Committee Greg Clark said Mr Cummings had not provided evidence to back up his allegation – something Mr Hancock said was "telling".