COVID-19: Booster jabs for over-40s – The data behind the vaccine expansion and the route to a lockdown-free winter 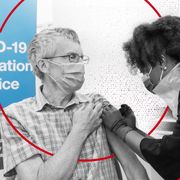 The vaccine booster rollout is to be extended to people aged 40 and over, the government announced earlier today.

Booster doses had previously only been available to people aged 50 and over, as well as those who are medically vulnerable in younger age groups, health workers and close contacts of people with weak immune systems.

It is hoped that a successful vaccine booster programme can help the UK avoid another lockdown over the winter period – particularly over Christmas – as has already happened in Austria and the Netherlands this week.

Live COVID updates from the UK and around the world

But what does the data tell us about why this step has been taken now and why the government thinks it is so important?

Hospitalisation rates started to rise across the UK in summer, as immunity began to wane among older age groups.

But rates among these groups have started to come down since the booster rollout has accelerated.

As the chart above shows, hospitalisations have been falling steadily for over-60s for some weeks now, but they have not for people in the relatively younger age groups.

A study released on Monday by the UK Health and Security Agency, quoted by deputy chief medical officer Jonathan Van-Tam during today’s announcement, shows the high levels of protection that the booster gives you, even when compared with people who have had two doses.

People on the study who had a booster jab were four times less likely to test positive for COVID compared with those who had received two jabs more than five months ago.

These UK figures match closely those of an Israeli study released recently and also referenced by Professor Van-Tam on Monday morning.

After a third dose, COVID infection was reduced tenfold, hospitalisations from COVID were almost 19 times lower. And deaths were down by almost 15 times, according to that Israeli study.

Although more than four in five over 50s have had a COVID vaccine, only two in three 18 to 39-year-olds have done so.

Unvaccinated 20 to 29-year-olds are five times more likely to end up in hospital after contracting coronavirus, compared with those who were double jabbed. Professor Van-Tam said the risk is four times higher for 30 to 39-year-olds.

Other European countries are resorting to lockdowns again, in response to high case numbers and hospital admissions across the continent.

The Netherlands returned to lockdown measures on Saturday, with bars, restaurants and supermarkets all closing from 8pm.

Austria’s lockdown, which began today, only affects the unvaccinated at the moment.

Two million people who have not had a jab there, nearly a quarter of the population, are now only allowed to leave their homes for work, school, exercise and buying essential supplies.

Professor Neil Ferguson, an epidemiologist and member of the government’s Scientific Advisory Group for Emergencies (SAGE), said on Saturday that the UK was unlikely to have to resort to similar measures.

This is partly thanks to the successful booster rollout and higher vaccine uptake relative to those countries, but also the higher natural level of immunity Britain picked up as a result of having had a higher infection rate than other European countries.

Professor Ferguson said the high number of cases "has obviously had a downside". But, "paradoxically it had an upside of boosting the immunity of the population compared to countries like Germany, the Netherlands and France".

The point about vaccines was also reinforced by Prime Minister Boris Johnson during a briefing on Monday afternoon.

"If we want to avoid restrictions on our daily lives, we must all be vaccinated as soon as possible."