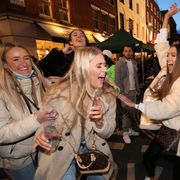 That meant that GDP was a record 27.6% larger compared with the same month last year when the nation was in the grip of the first coronavirus lockdown.

Live COVID updates from the UK and across the world

The data from the Office for National Statistics (ONS) covers a period when non-essential retail as well as outdoor drinking and dining were allowed to resume – on 12 April.

There was also an increase in car and caravan sales as well as negative one-off factors such as car plant shutdowns and oil field maintenance.

Meanwhile, trade friction following the end of the Brexit transition period continued to have an impact.

Monthly imports from non-EU countries were the highest since records began in January 1997, the ONS said.

UK GDP shrank by 1.5% in the first quarter though on a monthly basis the economy has been recovering ever since a 2.5% contraction in January, posting growth of 0.7% in February and 2.1% in March.

April’s growth figure was broadly in line with economists’ expectations.

Thomas Pugh, UK economist at Capital Economics, said: "The jump in GDP in April was another sign that consumers are raring to spend as the economy reopens.

"GDP is on track to return to its February level before the end of the year.

"If anything, the economy could regain its pre-crisis level even sooner."