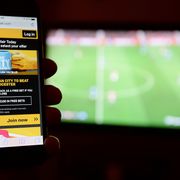 What started as a few football bets left one man a million pounds in the red, facing jail time and contemplating taking his own life.

And he is not the only one.

With the World Cup kicking off in just five days’ time, more than a quarter of football fans say they feel anxious about how much they might lose while betting during the tournament, a new survey has found.

Financial pressures and the rising cost of living may also drive some to gamble more than they intend.

Meanwhile, six in 10 said they agreed there are too many gambling adverts during international tournaments, the research for charity GambleAware said.

Chris (not his real name) began gambling aged 16 – below the legal age – and for the next two decades focussed almost entirely on football betting.

After a few years, the habit became "more progressive and more destructive".

He progressed to a career where he earned more money – with "access to wealthy people" – and it reached the point where he couldn’t watch a football game without place a bet of between £500 and £1,000.

At one point, he said he "owed just over a million pounds to gambling".

"I had this relationship with football where I felt I knew about football," he told Sky News.

"But as the gambling progressed, understanding goes out the window and gambling is erratic and it doesn’t become about the knowledge anymore."

Gambling ‘as much money as I could get hold of’

While Chris was visiting betting shops up to three times a day, smartphone apps now mean people can gamble from the comfort of their own homes – and with that ease can come devastating losses.

GambleAware said 43% of football fans plan to bet during this year’s World Cup and among those, 39% admitted that financial pressures might drive them to gamble more than intended.

"My bets would become very heavy around the World Cup and the Euros," Chris said, adding that the tournament would "consume" him.

"My traditional bets for a normal Saturday would be around a £500 treble, and in the World Cup it would go into the thousands."

He would place bets with as "much money as I could get hold of".

When he couldn’t afford to place any more bets, he started stealing from his employer – and was eventually convicted of fraud and handed a 24-month suspended sentence.

The shame and the guilt around gambling led Chris to try to take his own life, and he was placed in psychiatric care.

Attending Gamblers Anonymous meetings led him to work as a peer supporter for Betknowmore UK’s Peer Aid program, and he now works with others facing addiction.

Read more: Footballers and celebs to be banned from gambling adverts

GambleAware has launched a new campaign to help fans who gamble to avoid what they called "Bet Regret" in the coming weeks as betting promotions on social media and TV ramp up.

The campaign, backed by the Football Supporters Association (FSA) and former players including Peter Shilton, Shaun Wright-Phillips and Lee Hendrie, encourages people who bet to manage their behaviour by deleting apps and setting a spending limit.

He said it took a "massive toll" financially and on his mental health, and credited his wife for her support throughout the ordeal.

Urging others to ask for help if they need it, he said: "I’ve seen first-hand how easy it can be to get carried away and place an impulsive bet, especially when betting promotions are all around you.

"I’d urge everyone to stop and think, is my gambling out of control? If so, reach out for support."

More than half of people (56%) said it is easy to lose more money than expected, the survey of 2,000 fans by Opinium showed.

The results suggested that 28% of supporters said they felt anxious about how much they might lose in bets during the tournament, which begins in Qatar on Sunday.

GambleAware defined "Bet Regret" as the universal "sinking feeling" that people can experience after making an impulsive bet, often when drunk, bored or chasing losses.

Zoe Osmond, the charity’s chief executive, warned that cost of living pressures as Christmas approaches could lead to the "perfect storm" as people are tempted to gamble more.

She said: "This should be an enjoyable time for all football fans, but with the sheer volume of football and the amount of betting ads, it can be easy to get carried away with betting – and we can see that many fans are already feeling anxious about this.

"As the cost of living crisis bites and people feel the pinch in the run-up to Christmas, this could create a perfect storm where fans resort to gambling as a way to cope.

"This can have the opposite effect, both financially and in terms of mental health."

He said the government is undertaking a "comprehensive review" of current gambling laws "to ensure they are fit for the digital age, including considering the evidence on gambling advertising and marketing".

Anyone concerned about their gambling, or that of a loved one, can visit BeGambleAware.org for free, confidential advice and support, or The National Gambling Helpline is available on 0808 8020 133 and operates 24 hours a day, seven days a week.