Coronavirus: Leicester to be told it must stay in current lockdown for extra two weeks after spike in COVID-19cases 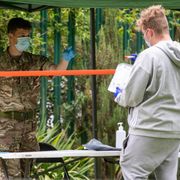 Government officials have recommended the current lockdown measures remain in force in the city of Leicester for an extra two weeks as restrictions are eased across the rest of England from this Saturday.

Leicester’s mayor Sir Peter Soulsby said he received a report by email just after 1am on Monday detailing the suggestions which he said were unjustified and had been "hastily cobbled together".

He said it had left him "angry and frustrated", adding that a meeting due to take place this morning between him, the council’s director of public health Ivan Browne and Whitehall officials to discuss a local surge in COVID-19 cases in recent weeks, had been cancelled.

Coronavirus lockdown measures are due to be relaxed in England on 4 July, with pubs, bars, restaurants and hairdressers allowed to open.

But the Public Health England (PHE) report recommends delaying "relaxation actions in Leicester and enhancement of monitoring of social distancing guidelines for at least two weeks".

It suggests "targeted enhanced actions" such as the "closure" of non-essential shops and other areas where social gatherings may take place, as well as workplaces where 5% or 10% of staff have tested positive for COVID-19 within a two-week period.

It also recommends local officials consider the weekly testing of all care home staff – around 250 venues – "to protect the most vulnerable for the next four weeks".

Sir Peter told Sky News the recommendations from PHE would have a "significant" impact on residents, adding he had been shown "no evidence" to convince him that if the city was to remain restricted for longer than the rest of the country "that would make a difference".

He said the report acknowledges there have been more cases in Leicester because of an increase in testing, and that there has been a decline in coronavirus-related deaths in the city – similar to what is happening across the country.

"They certainly don’t suggest that there are particular issues here that need to be dealt with in some dramatic way," he said.

"That is fine if it is necessary, but they will have to prove it is necessary… or that it would make any difference… and then explain to us how on earth it can be made to happen."

He earlier told LBC Radio: "What they are recommending is that they extend for two weeks the present level of restrictions when the rest of the country has them lifted on 4 July.

"Even that, when I look at their report as I have done over the last few hours, is not justified by any of the figures they have let us have. There is very little substance in it."

"I gather that a group of officials came here for a day visit and talked to a few people and then went back and cobbled this report together. That is not the basis for sensible policy-making about the very considerable dangers of this virus."

Sir Peter said the council was only provided with detailed testing information for the first time on Thursday – a week after Health Secretary Matt Hancock announced there was a local outbreak in the city.

It comes as the green light has been given for pubs, restaurants, hotels, hairdressers and barbers in England to reopen from 4 July, with parks and shops with outdoor entrances able to reopen in Scotland, and schools in Wales welcoming more pupils.

According to Public Health England data, almost 3,000 coronavirus cases have been confirmed in Leicester since the start of the pandemic.

Of these, 866 cases were reported in the last two weeks.

Boris Johnson said the government was "concerned about Leicester".

The prime minister said the local "whack-a-mole" strategy had worked in Weston-super-Mare and where there had been outbreaks around GP surgeries in London.

"That’s the same approach that we will bring to bear in Leicester as well."

Education Secretary Gavin Williamson told Sky News: "I know that the government is working very closely, both with the mayor and Leicester City Council – in terms of making sure that the next steps and the right steps are taken in dealing with this pandemic.

"We have to accept – and this isn’t about Leicester but the whole of the country – there will be periods over the coming months where we will see local lockdowns.

"We will have to take action in certain local areas in order to keep on top of this deadly virus."

The Department of Health and Social Care (DHSC) said on Sunday that Leicester was an area of concern and urged residents to be vigilant against the virus.

It stopped short of saying a local lockdown was likely.

Former government chief scientific officer Sir Mark Walport told Sky News it would be necessary to "clamp down" as clusters begin to reappear.

He said: "The… thing that is becoming clear now is that when outbreaks occur, they typically occur in clusters and we’re seeing certain work environments, for example food-processing factories, as being fairly common places for those clusters to arise.

"In Korea for example, they found that places of worship were places that clusters have arisen and the common denominator being indoors, being crowded, being there for prolonged periods of time and noisy environments where people are coughing and shouting and so there is more droplet transmission.

"And so, again, it comes back to local control being really important to identify those clusters when they happen and clamp down on them quickly."

The DHSC said 43,550 people had died in hospitals, care homes and the wider community after testing positive for coronavirus in the UK as of 5pm on Saturday, up by 36 from the day before.

The government figures do not include all deaths involving COVID-19 across the UK, which are thought to have passed 54,000.