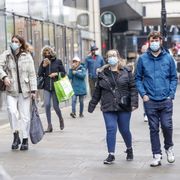 Andy Burnham is facing a new clash with Boris Johnson over claims that hospitals in Greater Manchester are running out of beds to treat people infected with COVID-19.

As the Greater Manchester mayor battles with the prime minister over Tier 3 status and cash to support businesses forced to close, Sky News has seen figures that suggest some of the region’s 12 hospitals are already full.

The figures also show the Royal Bolton Hospital is running at 94% capacity.

The NHS said in a statement: "We are monitoring the situation with our hospital admissions, overall beds and ITU beds very very closely.

"It’s not unusual for 80% to 85% of ICU beds to be in use at this time of year and our hospitals work together if there are particular pressures in any one area, to ensure the best care for patients who need the high level of support ICU provides, both for Covid and for other reasons."

A source at the GMCCN told Sky News the NHS usually say they’re "at capacity" when they hit 85% not 100%.

However, they added the data from the GMCCN which shows hospitals are at full capacity means they actually have no critical care beds left.

A spokesperson for the NHS in the North West has said: "Coronavirus cases are rising and it is obviously a serious situation so it is vital everyone does what they can to control the virus."

The figures have emerged after Mr Burnham accused Mr Johnson of exaggerating the severity of the crisis in the region.

It is also being reported that after Mr Burnham held "constructive" talks with Mr Johnson’s senior aide Sir Edward Lister, the prime minister is now ready to offer tens of millions of pounds to head off a Tier 3 revolt.

Mr Burnham has written to Mr Johnson and other party leaders proposing a Commons debate and vote to "break the impasse" and establish a cross-party consensus on financial aid for Tier 3 areas.

In total, the UK recorded another 16,171 positive cases on Sunday and a further 150 COVID-related deaths.

But separate figures from the UK’s statistic agencies suggest up to 58,500 people have died with the virus mentioned on their death certificate.

The reported beds crisis in Manchester came after Mr Burnham disputed a claim by the prime minister in a Downing Street news conference on Friday, when he said the coronavirus outbreak in Manchester was "grave" and cases had doubled in the last nine days.

Mr Burnham said in a Sunday TV interview: "I think it was an exaggeration of the position that we’re in. Of course it’s a matter of concern, and we watch the figures very closely indeed.

"But the figures have been falling in Manchester itself in the last few days, across Greater Manchester up slightly but certainly not doubling every nine days."

Although Mr Burnham’s criticism of Mr Johnson prompted Cabinet Office minister Michael Gove to accuse the mayor of "posturing", it is reported the prime minister is ready to offer extra cash for the region if a deal on Tier 3 is reached.

The Times reports that Downing Street has not ruled out imposing Tier 3 status on Greater Manchester, but has accepted it is more likely to work if backed by local leaders.

Significantly, Mr Burnham’s demands for more cash are being backed by Sir Graham Brady, MP for Altrincham and Sale West and chairman of the Conservative backbench 1922 Committee.

But cracks began to appear in Tory backing for Mr Burnham when five Conservative MPs from Greater Manchester wrote to him urging him to do a deal "around the negotiating table and not via loud-hailer".

Earlier, proposing a Commons debate and vote, Mr Burnham urged party leaders: "We recognise the uncertainty that this is causing and write to ask for your help in breaking the impasse and finding a fair resolution.

"This could be done by parliament calling an urgent debate and vote this week to establish a cross-party consensus on what constitutes a fair financial framework for people in areas under Tier 3 restrictions."

Elsewhere, Wales is expected to announce a "fire break" lockdown to curb the rate of infection. If it gets the green light it will begin on Friday and last for 17 days, a leaked document claimed last week.

In Ireland, the cabinet is meeting to make a final decision on whether to impose its highest Level 5 measures – equivalent to England’s Tier 3 – as part of a six-week lockdown, after its National Public Health Emergency Team recommended harsher restrictions.

It is understood that a middle ground between Level 4 and Level 5 is a probable scenario for the coming weeks.

Watch and follow ‘Postcode Lockdown: A Divided Nation’ on Sky News from 9pm on Monday, as it examines which strategy is best for Britain