Coronavirus: Half of England now under stricter rules as new COVID-19 restrictions come into force 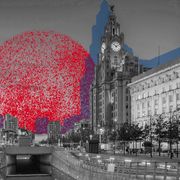 The UK map has been dramatically redrawn as new coronavirus measures came into force – changing the way millions of people live their lives.

Here is what has happened:

The changes mean more than half of England is banned from meeting friends and family from other households indoors – or altogether.

In Tier 2 areas – home to 26.7 million people – different households can meet outdoors. But with less daylight and winter weather on the way, socialising will become much harder.

Currently, only the Liverpool City Region and Lancashire are under Tier 3 restrictions.

A bitter political row between local politicians and the government has prevented Greater Manchester from also being subject to the harshest restrictions – although Boris Johnson warned he "will have to intervene" if an agreement is not made.

Greater Manchester mayor Andy Burnham accused the government of treating the north of England with contempt, and claimed Downing Street was trying to impose unproven measures "on the cheap".

In an impassioned news conference, he said: "We have to protect the health of the nation but let’s do it as one nation, and not make the north of England the sacrificial lamb for an ill-thought-through Downing Street policy which doesn’t make sense in the real world."

Senior Tories have warned Boris Johnson that he is facing a growing rebellion on his own backbenches.

Some politicians are claiming that the financial support being offered to hospitality venues is inadequate, given the significant impact that England’s restrictions will have on their ability to operate.

Pubs, restaurants and hotels in Tier 2 areas can only accept groups from the same household, while pubs and bars in Tier 3 will be forced to close unless they can operate as restaurants.

Despite this, businesses will not be eligible for government support unless they are forced to close entirely by the strictest Tier 3 measures.

Cities of London and Westminster Conservative MP Nickie Aiken said: "Whilst I appreciate the public health crisis we find ourselves in, I remain deeply concerned about the impact further lockdown will have on the capital’s hospitality, leisure and retail businesses.

"Alongside protecting the health of Londoners, protecting people’s jobs and livelihoods must be a priority at this time.

"Many of our businesses are already on their knees, and I urge the government to consider further support before they disappear for good."

Some Conservatives have also questioned why new restrictions are being imposed on London’s nine million people when infection rates fluctuate wildly between boroughs.

London mayor Sadiq Khan told Londoners who are being urged to make "monumental sacrifices" in the imminent local lockdown to "ignore government politicians" who have flouted coronavirus rules.

Mr Khan was asked whether he was worried about the effect that high-profile violations of restrictions would have on the public – including by the prime minister’s chief adviser Dominic Cummings and the former SNP MP Margaret Ferrier.

The mayor said: "I know from anecdotal experience, speaking to Londoners from all walks of life, but also from polling done by independent polling companies, that the way the prime minister’s chief adviser behaved led to people asking the question ‘why should I follow the rules when he isn’t?’.

"My advice to Londoners is to ignore what government ministers do, or government advisers do, or members of parliament do.

Health Secretary Matt Hancock told the House of Commons as he announced changes on Thursday: "We must take firm and balanced decisions to keep this virus under control.

"This is the only way to protect lives and livelihoods – and we must act now. Delayed action means more deaths from COVID-19, it means more non-COVID deaths and it means more economic pain later."