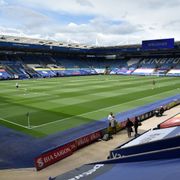 Leicester City’s home game on Saturday against Crystal Palace could end up being postponed, despite the health secretary telling Sky News it would go ahead amid the local lockdown.

The city has become the first area to be placed in to a local lockdown after a spike in coronavirus cases and will not reopen in line with the rest of England on Saturday.

The Premier League’s chief executive Richard Masters told MPs on Tuesday morning that he was still "waiting to hear" an update about the game, which is due to take place on Saturday afternoon in Leicester.

He told the Digital, Culture, Media and Sport Committee’s evidence session that the organisation has contingencies in place should the game need to be moved or postponed.

However despite the caution from the league’s chief, Health Secretary Matt Hancock said Leicester’s game at their home stadium will go ahead.

When asked by Sky News during his appearance on Kay [email protected] whether the game would be played as planned, Mr Hancock simply said: "Yes."

Due to social-distancing rules, Premier League fixtures are currently being played without a crowd, meaning there are very few people within stadiums during games.

Crystal Palace manager Roy Hodgson said on Monday night that he would be happy to play Leicester anywhere on Saturday, should Leicester be unable to host it.

"I did hear on the news today there was a potential problem in Leicester," the manager said.

"I am perfectly happy to let the Premier League take care of that. I am certain they will tell us where and when the game should be played.

"I am certain if they can’t play at Leicester, they will find an alternative venue and we are happy to go up and play against Leicester City wherever the Premier League tells us to play."

Sky News has reached out to both Leicester City and Crystal Palace for comment.