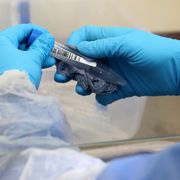 Daily coronavirus cases in England have increased to about 27,900, according to the Office for National Statistics – although the latest 24-hour update for the whole UK showed a significant drop on Friday.

The number of deaths announced on Friday was 136 – compared to 138 on Thursday and 137 on Wednesday.

A further 844 people were admitted to hospital on Friday, with 5,311 being treated in total.

The figures – covering 2 to 8 October – are for private households and do not include people in hospitals and care homes.

"The estimate shows the number of infections has continued to increase rapidly in recent weeks," said the Office for National Statistics.

It said there was also "clear evidence" of regional variation.

Places under stricter lockdowns – such as the North West, North East and Yorkshire – recorded significantly higher infection rates than regions such as southern and eastern England.

But trends show "growth in positivity in every region of England", added the ONS.

It comes as separate data from the government’s science advisers indicated the R number range for the whole of the UK had increased slightly – from between 1.2 and 1.5 last week to 1.3 and 1.5 today.

A number above 1 means the number of people infected is growing exponentially.

Older teenagers and young adults were getting infected the most, according to the ONS.

"Smaller increases are also apparent across all of the other age groups, apart from individuals aged 70 years and over," said the researchers.

The ONS Infection Survey tests tens of thousands of people each week – whether or not they have coronavirus symptoms. It is separate from the figures released each day by UK health authorities.

In Wales, there could be encouraging signs however.

ONS researchers said there was "some evidence that positivity rates may now have levelled off, although uncertainty is high".

Some 7,900 people were estimated to have the virus there during the week in question – or 1 in 390 people.

Northern Ireland’s estimate doubled though, rising to around 1 in 250 people infected from 1 in 500.

Its figures cover a longer two-week period, from 25 September to 8 October.

The country’s "circuit breaker" lockdown begins later, after the Derry Strabane Council area recorded a two-week incidence rate of almost 1,600 per 100,000 people – the highest in the UK.

Scotland is not covered by the ONS survey.