COP27: Antigua’s PM asks ‘Why should we live somewhere else?’ as he says his people don’t want to become climate refugees 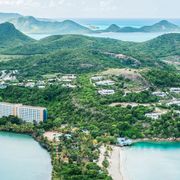 The leader of Antigua and Barbuda has said he will not allow his people to become climate refugees, in an indignant rebuff to the idea some citizens might have to relocate as climate breakdown bites.

"Why should we, [live somewhere else]?" Gaston Browne told Sky News during the COP27 climate summit in Egypt.

The Caribbean leader added: "That is our civilisation. That is where we have lived for hundreds of years."

The country must now generate all its drinking water via energy-intensive reverse osmosis, making agriculture unviable and forcing it to import 90% of its food.

"We will certainly not consider any option of relocation. We do not expect to become climate refugees in anyone’s country," he said.

The prime minister vowed to fight "unrelentingly for global emissions to be reduced", to preserve the country’s environment and "civilisation".

In an interview during his visit to Sharm el-Sheikh, Mr Browne also warned that multilateral climate action is failing to protect the planet with anything like the urgency needed.

The annual United Nations COP climate talks have made "incremental gains", he said.

"But the urgency that is needed to protect the planet – climate diplomacy has failed in that regard. And that is why other options must be pursued," he added.

He and other small island states like Tuvalu and Palau are seeking redress from the international courts to establish a legal means of holding polluters accountable.

Rich nations like the USA and UK have contributed far more to climate change than islands like Antigua, which cruelly are being disproportionately damaged. "The polluter must pay," he said.

"I don’t know that we can sit back and rely on the voluntary acts", because so far there has been only "creeping progress", he said.

He and the other small islands in his negotiating bloc are demanding the negotiations result in a new fund to pay compensation for those climate impacts that are beyond the realms of human adaptation – for example hurricanes supercharged by climate change that leave homes and the tourism industry in tatters.

COP27 started with a breakthrough as the issue of "finance" made it onto the agenda for the first time. Rich countries historically resisted the idea but are slowly coming round to it after extreme climate impacts at home and in vulnerable countries, such as severe flooding in Pakistan.

Today, as the second week of COP27 got underway, two options emerged in a draft document. While vulnerable nations want a dedicated fund, developed countries say there are already many funding options and institutions available that can be tweaked and improved.

They argue this could be more efficient than agreeing another dedicated fund, but the idea simply does not wash with many vulnerable countries who say they are fed up of relying on voluntary and vague measures.