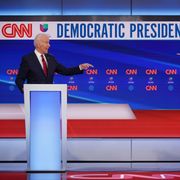 CNN’s parent company is shutting down its CNN+ streaming service just a few weeks after its highly anticipated launch.

After being touted as CNN’s bold entry to the so-called “streaming wars”, the service will cease operating on 30 April, the company said in a statement.

The network originally intended to invest more than $1bn into the platform over the next four years.

But at any given time, there were reportedly fewer than 10,000 people using the service following its launch.

"CNN will be strongest as part of WBD’s streaming strategy which envisions news as an important part of a compelling broader offering along with sports, entertainment, and nonfiction content,” said Chris Licht, CNN’s worldwide chairman and chief executive in a statement. “We have therefore made the decision to cease operations of CNN+."

The head of CNN’s digital streaming strategy, Andrew Morse, will step down when the service ends, the company said.

The business will instead focus on its core divisions, such as news and building CNN Digital, the company’s online entity.

It comes as the market reels from Netflix’s announcement that it had lost 200,000 subscribers in the first three months of 2022, the first time it had seen such a decline in more than a decade.

The streaming giant is currently the worst-performing stock on the S&P index, wiping off more than $50bn from the company’s market value.

One of America’s most famous investors, Bill Ackman, sold his $1.1bn investment in Netflix on Wednesday, just three months after his hedge fund purchased the shares.

Netflix placed some of the blame for the drop in subscribers on family members sharing the same account, something that the company has recently started to crack down on.

But analysts say that the battle between the titans of streaming – which now include the likes of Apple, Amazon, HBO, Hulu, and Disney – is another reason for a hit to its subscriber numbers.

There have been growing concerns for some time that after more than a decade of meteoric growth, Netflix would eventually start to see a drop off in subscribers as its competitors strengthened their offering.