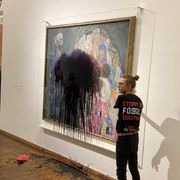 Climate activists have attacked a painting by Gustav Klimt with a black, oily liquid before another glued himself to its frame.

Members of the group Last Generation Austria attacked the 1915 painting Death And Life at the Leopold Museum in Vienna to protest against their government’s use of fossil energies.

After throwing the liquid on the painting – which was not damaged because it was behind a glass cover – one activist was pushed away by a museum guard while another protester glued his hand to the painting’s frame.

On Twitter the group defended the action, saying they were protesting against "oil and gas drilling", which they called "a death sentence to society".

In a video of the incident, which the group posted online, one of the activists can be heard shouting that "we have known about the problem for 50 years – we must finally act, otherwise the planet will be broken".

"Stop the fossil fuel destruction. We are racing into a climate hell."

Members of the same organisation also glued themselves to the frame of an early copy of Leonardo da Vinci’s The Last Supper at London’s Royal Academy of Arts, and to John Constable’s The Hay Wain in the National Gallery.