Cigarette in cockpit caused EgyptAir passenger jet to crash, killing all on board, investigation finds 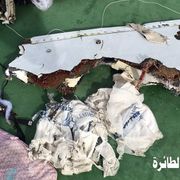 A pilot having a cigarette in a cockpit is believed to have brought down a passenger jet killing everyone on board, an investigation has found.

EgyptAir flight MS804 crashed into the Mediterranean Sea between Crete and the coast of northern Egypt in May 2016, killing 66 passengers and crew.

The Airbus A320 had been flying from Paris to Cairo with the Egyptian authorities claiming terrorism had been responsible for the incident.

An investigation has found that a fire broke out in the cockpit due to the oxygen escaping from the co-pilot’s mask when it is believed smoking was taking place.

The cigarette would have caused the oxygen to combust.

Three days before the crash, the pilot’s mask was replaced and its setting left on ’emergency’ instead of ‘normal’ by a maintenance engineer, causing oxygen to be emitted.

Experts are not sure why the mask had been left in this setting.

The Italian newspaper Corriere Della Sera reported it had seen the 134-page investigation document compiled by French experts which has been sent to the Paris Court of Appeal.

According to the report, Egyptian pilots would regularly smoke – just two months earlier, ashtrays in the same aircraft’s cockpit needed to be replaced.

With oxygen promoting combustion inside the cockpit, the fire is said to have been triggered by a "spark or a flame".

The document also mentions how audio reveals the pilot and co-pilot expressing that "they both feel tired from this night flight and from lack of sleep" – but experts said hours of rest had been "respected for both", reported Corriere Della Sera.