Cabinet reshuffle: Liz Truss ‘delighted’ to be promoted to foreign secretary as two of four top jobs go to women 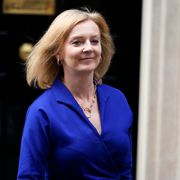 "The prime minister has put in place a strong and united team which is going to deliver for the United Kingdom," Ms Truss said.

"We’re determined to deliver on the people’s priorities and help level up the country.

"I’m delighted to be appointed foreign secretary to promote a positive outward vision of global Britain which is going to deliver for people right across the UK."

Moments before Ms Truss arrived at Downing Street, Mr Raab left and it was announced he had been appointed as deputy prime minister, lord chancellor and justice secretary.

His demotion comes after he was heavily criticised for being on holiday as the Taliban took power in Afghanistan.

Mr Johnson said his new cabinet would "work tirelessly to unite and level up the whole country".

He added: "We will build back better from the pandemic and deliver on your priorities.

She was quickly appointed as a junior minister in the Department for Education, then became environment secretary then justice secretary under Theresa May, the first woman to hold the position.